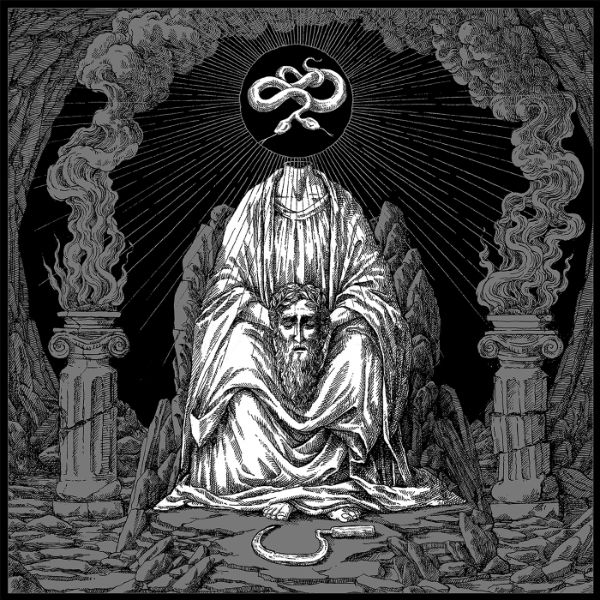 Italian black metal bands Fordomth and Malauriu join forces to release the split single Twin Serpent Dawn. Containing one song per band, the split will be released on June 20, 2019 in mini-cdr format limited to 66 copies via Masked Dead Records (pre-order here) and on August 25, 2019 in 7″ black vinyl, limited to 300 copies via Black Mourning Productions. Artwork by MarGoat.

“Twin Serpent Dawn flows from the blood of Saturn’s beheading, generating a bicephalous serpent consisting of Malauriu and Fordomth, the new school of occult black metal made in Trinacria. The rise of the black dawn begins with this damned and asphyxiating release.”

Malauriu (“bad omen” in Sicilian language) starts in 2013 from an idea of Schizoid. With a three-piece line-up consisting of Otis (drums), Marbas (vocals) and Schizoid (guitars) in 2014 the band releases its debut EP Presagi Di Morte, raw black metal sung in Sicilian language.

In 2015 the band changes line-up and style, opting for an acid black metal sung in Italian, and then participates to split albums with Eternu Duluri, Circle Of the Last Promontory, Heretical, Ortro and Feretri. In 2017 Malauriu releases the mini CD Semper Ad Mortem Cogitantes, featuring members of L’impero Delle Ombre, Sinoath, Bunker 66 and Inchiuvatu. The sound is a doom-influenced occult black metal with lyrics in Italian and Latin.
In 2018 Venor (vocals) and S.T. (bass) join the band, releasing the EP Morte and going towards a more extreme sound, lyrics dealing with themes of death, blasphemy and Sicilian legends. Lately the band releases Promo 2019 and a 12″ split with à Répit, Inféren and Vultur. Malauriu is now working on live sets and a full length album.

Fordomth was born in 2013 in Catania (IT) by the joining of six members already active in the extreme music scene. In June 2015 the studio production of I.N.D.N.S.L.E. – In Nomine Dei Nostri Satanas Luciferi Excelsi began. In July 2015 former drummer Mario Di Marco left the band right after the recording sessions. After that the band has been on hiatus until July 2017, when singer Federico ‘Fano’ Indelicato left and drummer Valerio Cimino joined the band. In January 2018 Giuseppe Virgillito leaves the line-up, consequently Gianluca ‘Vacvvm’ Buscema takes guitar duties leaving the vacant role of bass player to Martino Razza.

As a five-piece the band debuted live on February 17th, 2018 at Jettasangu Fest Vol. 1 (Catania). After that show guitarist Riccardo Cantarella left the band to move to Hungary. The current four-piece line-up has been established. As a result of these line-up changes the band have reconsidered their sound, switching toward an overwhelming and funereal black/sludge/doom metal.