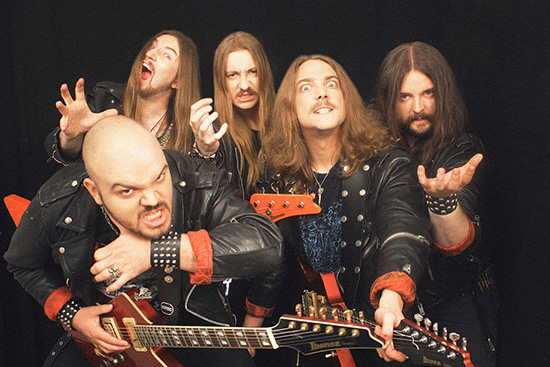 The previous singles, “B.T.B. (Beyond the Blade)” and “Stainless Glare”, can be heard at: metalblade.com/vulture – where Ghastly Waves & Battered Graves can be pre-ordered in the following formats: 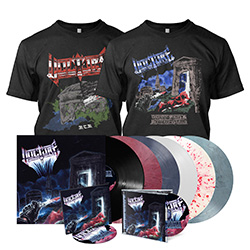 “We titled our second album ‘Ghastly Waves & Battered Graves‘ because it’s catchy, cold and metal as fuck,” Vulture guitarist Stefan Genozider declares succinctly. This is not an overstatement. The follow up to 2017’s cult sensation The Guillotine and their debut release for Metal Blade, the new full-length captures the German crew’s dispensing scathing thrash at a standard that places them toe-to-toe with the best in their genre. It is also a dramatic step forward in terms of songwriting and execution. “With ‘The Guillotine‘ we really restricted ourselves to reproducing our debut EP. We wanted it to sound the same, both in the actual music and sound-wise, but we knew that this wouldn’t work a third time, so we sat down and talked about what was missing in what we had come up with so far. From that discussion, the overall goal for our second full-length was to get more variation in our songs, work out more melodic parts and allow ourselves to slow down a little here and there.”

When it came to tracking, Vulture once again joined forces with close friend and producer Marco Brinkmann (Casket, Cross Vault) at Hellforge Studio in Detmold, Germany. “Overall, the album sounds very aggressive and cold, and our producer Marco once again managed to catch exactly what we wanted and mapped out a great mix that fits our music perfectly. There’s a lot of room for all those small accents and hints, but it also sounds very direct, in-your-face-alike, if you will,” says Genozider. With Brinkmanns’ incredibly busy schedule, their only window for recording were ten days in August, which turned out to be during the hottest summer the region had experienced in decades. This obviously made for quite an intense process, but the band was well prepared thanks to the countless hours spent in pre-production and targeted on what they wanted to achieve they managed to finish up a day early. They also tracked a cover of Thin Lizzy‘s “Killer On The Loose” to cap off the collection. “Finding a fitting cover isn’t easy but this track just clicks with Vulture,” enthuses Axetinctor. “You have the lyrical theme, the ripping riffs and most importantly it’s a great song by one of our favorite bands.”