The classic live album with the classic line-up to be released on the 21st of December 2018 remixed and returned. 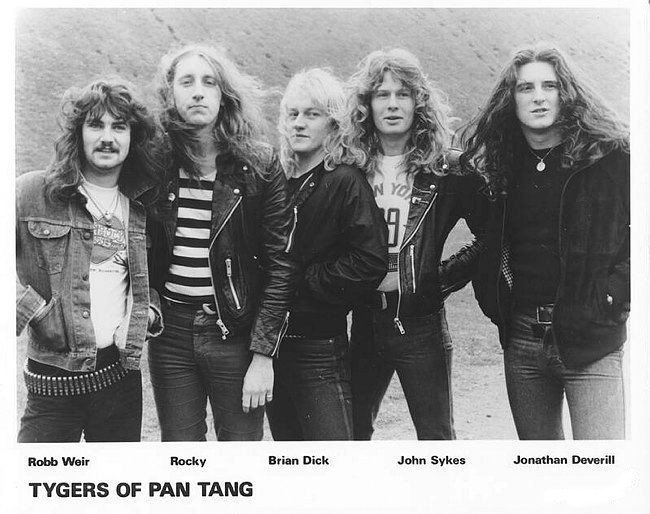 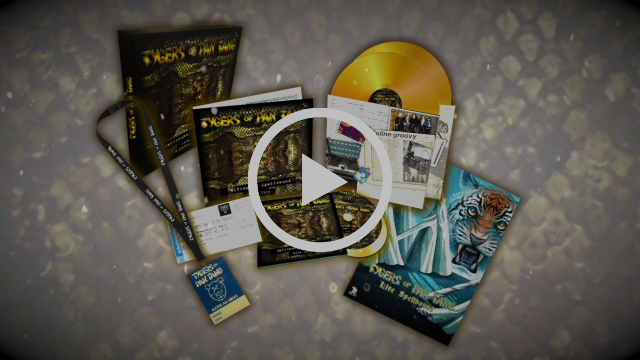 Are you ready for one of the best live recordings ever done by a rock band? On 21st of December 2018 the Tygers Of Pan Tang will release “Hellbound Spellbound Live 1981” featuring the classic line up:

The show was originally recorded live by Chris Tsangarides at Nottingham Rock City in 1981 and has now been remixed and remastered by Soren Andersen (Glenn Hughes/Mike Tramp) in October 2018 at the Medley Studios in Denmark.

The release is exclusively available for pre-order now at www.targetshop.dk/tygers-of-pan-tang in the following formats:

A lot of this material has never been published before and will available exclusively on this release.

‘Hellhound, Spellbound, Shot down, Heading for the ground’.

When Rocky penned those words, he could have been talking about the Tygers instead of a fighter pilot.

Starting life as four young rock music enthusiasts who refused to play a set of ‘covers’, as was normal at that time, the Tygers insisted on taking their own compositions to the tough learning curve that was the working men’s clubs of the north east. In around two years the Tygers had gone from enthusiastic amateurs to become a band who could sell records in quantity and headline Hammersmith Odeon. This gig in Nottingham was the second night of the tour that saw them playing the best tracks from the magnificent ‘Spellbound’ (now even more revered than it was at the time). The previous night the tour had opened in Jon Deverill’s home town of Cardiff. Long before the band went on stage that night the crowd could be heard chanting ‘Tygers, Tygers’. The nervous anticipation in the dressing room gave way to a confident, sleek metallic monster as the band hit the stage. The performance suggested that the new Tygers line up was destined for great things. The following night in Nottingham, fuelled by enthusiasm and the deep joy of touring at this level, the performance was electrifying. Already drums and bass had evolved into a fearsome barrage that pushed the two guitarists to unleash a fusillade of solos. Drummer Brian Dick steers the Tygers ship on a ridiculously fast course with what could be his finest hour.

With a note of regret in his voice Brian recently commented ‘We were riding along on the crest of a wave and the sun was very much in the sky. Sadly, it set all too soon.’  Rocky, ever the bands conscience, knew that they had reached a stage that few musicians could hope for and his inventive bass playing is also a feature of this recording. When asked how he felt now about the Spellbound tour he commented ‘Off the back of what were our two best albums this tour was probably the “classic” line up of the Tygers at their most exciting live. We might have got more professional and more experienced on later tours but for raw excitement this was hard to beat’.

Guitarist Robb Weir and John Sykes trade solos that demonstrate effectively how two guitarists of different styles can complement each other. Bringing it all together was the peerless voice of Jon Deverill. High on the experience of being hailed as hero in his home town the previous evening Jon commanded the stage and fully represented the Tygers unwaivable self-belief ‘It was my first tour… crazy…exciting…and never to be forgotten”Listen closely to this recording and the punk energy that propelled the original Tygers to conquer the clubs can be heard. By the time of this recording it had been linked to a matured writing ability that should have guaranteed the longevity of the band. Alas, two albums later that notion collapsed, a fact that John Sykes recently reflected upon when I spoke to him about the Spellbound tour.  ‘I really think that if the Tygers would have had stronger support from the label back in the day that the band could have really made it.’

We will leave the last word on these recordings to the man who has carried the Tygers flag through a mix of adversity and heady success for 40 years  – Mr Robb Weir.  ‘Like a well matured whiskey, it’s taken 38 years for us to fine tune it for you to hear this at its very best. Sit back, turn up the volume and immerse yourself in Tygers of Pan Tang style hard rock, circa 1981….’Credit must go to the following people who made this live recording a reality: Mixmaster Soren Andersen who discovered nuances that were missing from the original mix and generally sharpened the sound all round. Chris Tsangarides, who recorded the concert, produced the Spellbound album and is missed by everyone who knew him.

My management partner and friend, Grahame Thompson who provided information far beyond the call of duty for the album cover (and tour managed the Spellbound tour juggernaut). Michael H. Andersen, record company boss and inveterate Tygers fan who wanted to see these recording reissued. Finally Soren Weiss who worked patiently on the many revisions to the booklet! However, the most credit must go the five musicians on this recording who created the lightning that was bottled that night in Nottingham. 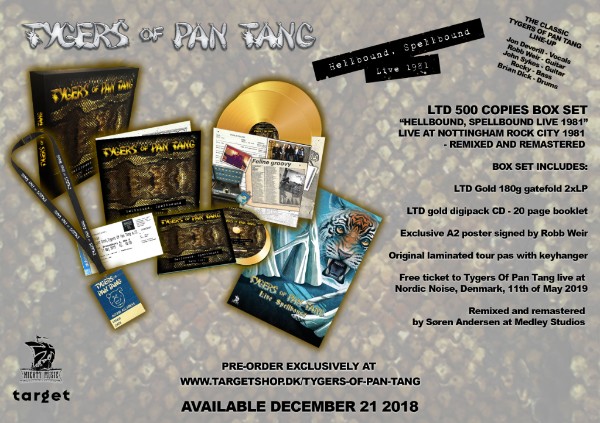