TRIVIUM, TESSERACT, UADA, VLTIMAS and CABAL will deliver a fistful of quality metal in a hard punch in the face, rounding off this year’s line-up with a handful of really heavy metal bands playing everything from progressive djent to old school death metal. 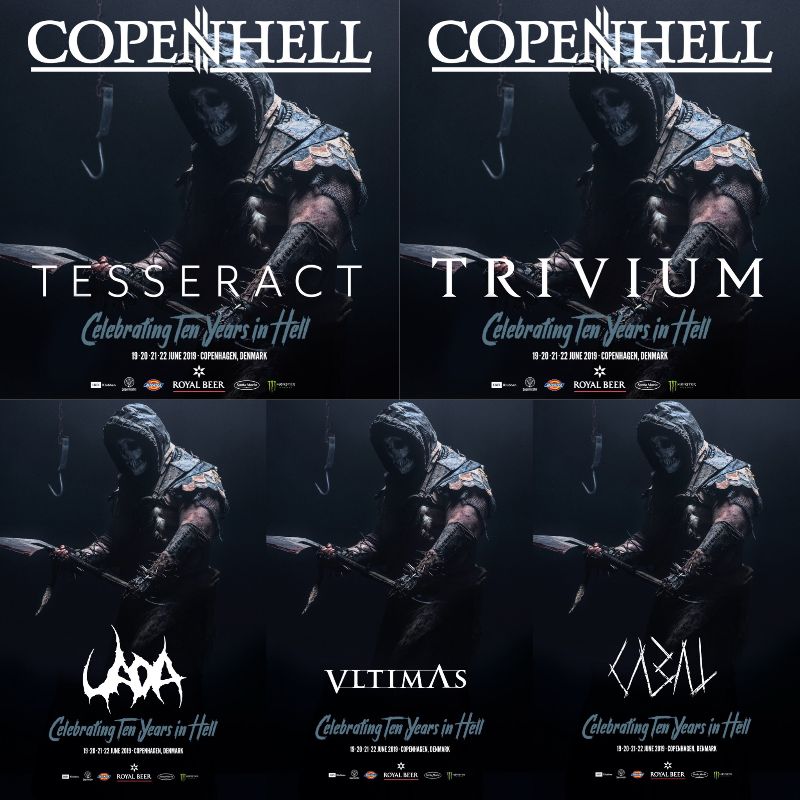 Through the last two decades, TRIVIUM has reached for the stars with their hyper-efficient and popular metalcore.

The band visited COPENHELL in 2012 and again in 2016, where they laid waste to the audience with their catchy headbanger metal and infectious performance.

We look forward to meeting the heavy boys from Florida yet again for another musical tour de force!

The British band TESSERACT plays progressive metal and is one of the pioneers of the popular djent sub-genre.

Their music is a tornado of advanced rhythmical and melodic techniques carried by Daniel Tompkins’ formidable, explosive voice.

Here is a band that is not afraid of experimenting with genres and reinvent themselves constantly, and the COPENHELL audience can expect a concert full of musical surprises.

UADA appeared like a bolt from the blue with their convincing debut album ”Devoid of Light” in 2016.

The quartet quickly established themselves as one of this decade’s most important new black metal bands, and they have darkened the skies ever since with their pitch-black, melodic approach to the genre.

With a running start and lots of evolution in their sound already, they are ready to throw one hell of a party for all the black metal enthusiasts!

When you use the term ”super group”, you have to make sure that it is a fitting term – and that is indeef the case with VLTIMAS!

All fans of classic death metal can start looking forward to this experience!

The Danish band CABAL is this year’s ”Tak Rock!” band at COPENHELL.

Their sinister sound lands somewhere between blackened deathcore and hardcore with massive breakdown, spitting and raging vocals and a thick, permeating atmosphere of pure evil. This young band is already playing in the big leagues and showing huge potential.

Purchase tickets, read much more about the festival and all of the bands at Copenhell.dk or in our official COPENHELL app  – and follow us at Facebook, Spotify and Instagram.

This is the tenth album of this Italian band. Eldritch is a progressive metal band, although I have to say that the term progressive isn’t always easy to describe. What is progressive? Must the music [Read »]