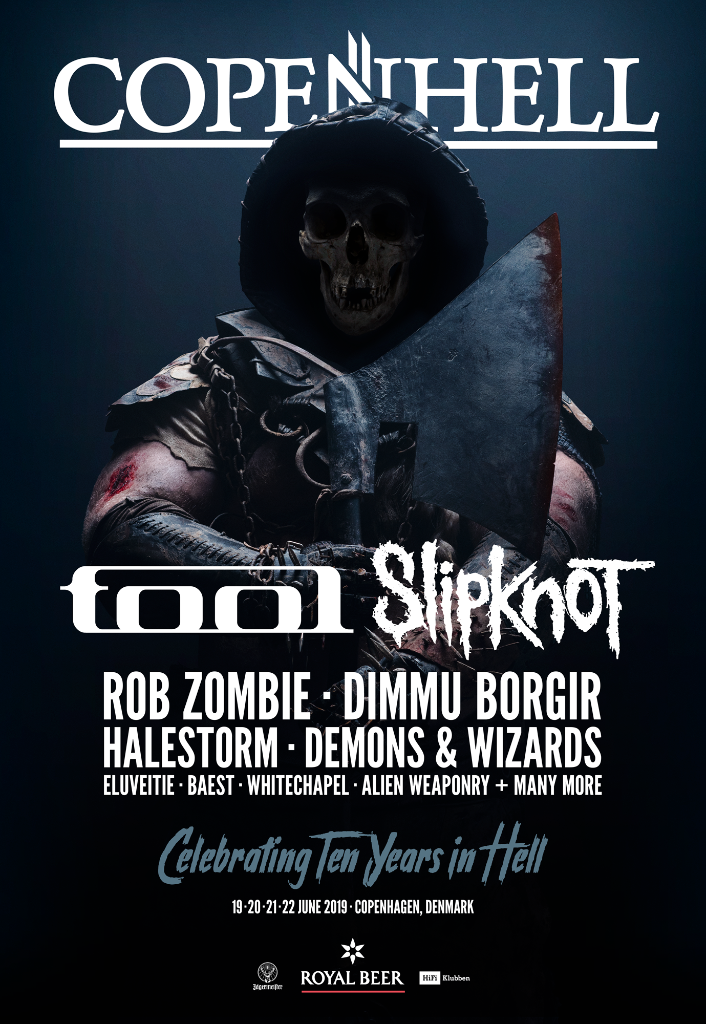 Ever since the beginning of their wild rampage, SLIPKNOT have embraced enigma and worked with a rarely seen combination of aggression and provocation in their distinct style and powerful music. Concerts with this masked ensemble feel like a grotesque musical stage play, with the hyperactive frontman Corey Taylor as the protagonist who is constantly whipping the audience into pure ecstasy.This American band embarked on their illustrious career in Des Moines, Iowa in 1999 and through the last two decades, they have achieved 10 Grammy nominations (and won one with ‘Before I Forget’ in 2006), as well as made 13 platinum and 44 gold albums all over the world due to their super-efficient mix of heavy metal, hard rock and nu metal. Their latest album, ‘The Gray Chapter’ from 2014, went straight into Top 5 in 19 different countries.

SLIPKNOT will celebrate their 20-year anniversary when they return to COPENHELL in 2019, and we can expect one hell of a party together with them. Early next year, they will enter the studio and produce new material for their upcoming album, and we look forward to an explosive cocktail of their existing mega hits and great new songs this summer.

TOOL is one of the absolute heavyweights on the international rock and metal scene and the single most requested band by the COPENHELL audience through the years. With only four released albums during 25 years – and a fifth one coming up – these eccentric Americans have managed to establish themselves as one of the greatest rock and metal bands ever. And with good reason, as intellect and emotions melt together at an unbelievably high level in their completely unique sound and fascinating universe.

TOOL’s progressive, experimental music vibrates in the sparkling tension field between rock and metal. It is carried by a superior combination of complex rhythmics, crushing riffs and brilliant songwriting, where everything melts together and forms an incredible synthesis. The band is respected by everyone, and it is therefore the perfect headliner for a festival that celebrates solidarity, community and music culture across both genres and generations.

TOOL’s last visit in Denmark was more than 12 years ago, and we are therefore immensely proud to present this seminal, ultra-ambitious band as the COPENHELL 2019 headliner. This will be an absolutely phenomenal experience.

The amazingly entertaining music artist and film creator ROB ZOMBIE delivered a formidable concert at COPENHELL 2017, and we are very happy to welcome the metal wizard back to the festival next year. We look forward to experiencing his impressive music horror show again – and we can hopefully count on hearing lots of songs from his new 2019 album.

SLIPKNOT, TOOL and ROB ZOMBIE join HALESTORM, DIMMU BORGIR, ELUVEITIE, DEMONS & WIZARDS, BAEST, WHITECHAPEL, ALIEN WEAPONRY and many, many other bands in the heaviest and most varied music schedule in COPENHELL’s history.

I’m always encouraged when I hear a debut musical project that offers an approach that comes off as seasoned and professional.  It’s hard to pull off a really great debut in a lot of ways.  [Read »]