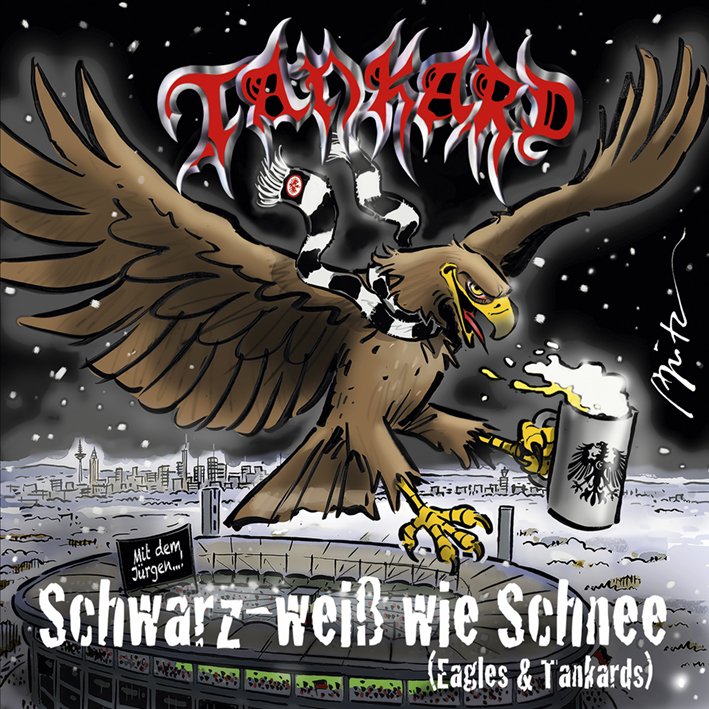 The German football club EINTRACHT FRANKFURT is set to celebrate its 120th anniversary in the Commerzbank Arena (stadium) in the most extraordinary and unprecedented settings on Saturday, June 29th, 2019.

Together with the hr-Sinfonieorchester and many other artists, the club is set to embark on a unique journey back through time, and through their history. There will be musical highs and lows, in the style of the “moody diva”.

Also, the thrash metal legends TANKARD will perform the club’s anthem ‘Schwarz-weiß wie Schnee’ together with the Sinphony-Orchestra, for the first time.

Frontman Gerre states:
“It is a great honour for us to be able to perform live in the Waldstadion again. We will only be playing one song live, but it will be our Eintracht anthem “Schwarz-Weiss wie Schnee” together with the Hessian symphony orchestra! Classical meets Thrash Metal – hopefully this works well and the conductor won’t lose his baton… hahaha… we are really looking forward to this event, especially as it will be broadcast live on Hessen TV”.

The German TV station HR will stream the whole event live on TV and the internet. Check it out on Saturday, 20:15 CET here:  https://www.hr-fernsehen.de/livestream/index.html

After the event, the TV-station will show a movie about club legend Jürgen Grabowski, in which the band also took part – so it’s worth staying tuned.

Impressively, the track has been performed three times by the band before the German football cup final (2006, 2017 & 2018) in which their hometown team Eintracht Frankfurt participated. Check out the official video here: https://youtu.be/t1ywnQ6qhgg

‘Schwarz-weiß wie Schnee’ is the anthem of the German football club Eintrach Frankfurt and has been played in the stadium for ten years before every home game. The song has now been completely re-recorded by the band. The thrashers were supported by Henni Nachtsheim (BADESALZ), Ande Werner (MUNDSTUHL) and Roy Hammer (ROY HAMMER & DIE PRALINÉES), who can be heard in the backing choir. The artwork was designed by cult comic artist Michael Apitz, whose comics have been published for years in the stadium newspaper of Eintracht Frankfurt.

You can order the EP here: www.nuclearblast.de/tankard

TANKARD released their highly praised 17th studio album »One Foot In The Grave« in June 2017 via Nuclear Blast Records. With the enormous support of their loyal fan base, the band entered the German album charts at #26, which marks the highest entry in the band’s career.

More on »One Foot In The Grave«:

Frankfurt-based thrash legend TANKARD unfortunaly has to announce, that drummer Olaf Zissel was taken to hospital due to a suspected stroke. Olaf is doing well according to circumstances at the moment. He will undergo a [Read »]