Hexed releases a new video for the song “Oceans”. The video is recorded live at the Aria Complex at Metal Over Malta Festival 2019. The song is taken from the bands debut album “Netherworld”, that was released last year via ViciSolum Productions.

The video is filmed by Kicki Holmén, Ulf Åhgren and Kari Aspsund and edited by Stellan Gunnarsson. 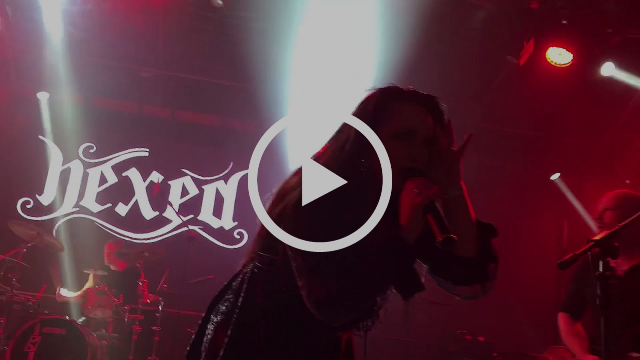 Listen to and Get the album at:

HEXED was formed in 2015 by Lead Vocalist Tina Gunnarsson and  Guitarist/Vocalist Stellan Gunnarsson in Uppsala, Sweden. Shortly after the material and pre-production was done Daniel Håkansson joined the band on bass guitar along with Teddy Möller on drums. With the addition of the new drummer Simon Aspsund in 2018 and guitarist Jay Matharu in 2019 the current 5-piece line-up was complete.

HEXED’s  inspiration comes from bands such as Queensrÿche and Crimson  Glory.  The music focuses on strong and powerful  vocals combined with driving rhythms and dark melodic  guitars.
HEXED debut single and first lyric video “Dreams” was  launched in the beginning of May 2016.
During the recordings of the “Netherworld” album HEXED released  their second single and the first official music video for the track “Exhaling  Life” which contains amazing guest-vocals from Thomas  Vikström (Therion, Candlemass).  The third single with lyric video “Lightyears” was released in May 2017. The  response and interest for HEXED  after these early releases was overwhelming.  HEXED received several  proposals before signing a Worldwide record deal  with  Thomas  Hörnkvist and “ViciSolum  Productions”.

HEXED’s first full-length  album  “Netherworld” was released on the 30th March 2018. The debut was well received leading to many amazing reviews from both press and fans all over the world.  In  addition to Thomas Vikström’s  participation on the album you can also hear powerful guest-vocals from the magnificent singer Ronny Hemlin – (Tad  Morose) on the last track “Remake  My  Soul”.Together with the album, the opening  track “Obedience” combined with a lyric video was simultaneously released.

Early on the band gained a strong reputation for delivering a solid and energetic live performance. HEXED has played venues all around Europe including several well known festivals during 2018-2019.

In March – April 2019 HEXED embarked on a European Tour covering eight different countries together with danish band “Manticora” and fellow swedes “Loch Vostok”.
During this Tour the band received amazing feedback from the audiences and also experienced an overwhelming amount of  interest from both Radio stations and Magazines. Several interviews, photo sessions and meetings with media along the Tour helped to build up the band’s fanbase.

HEXED have already shared stages with several established artists such as Leprous, Omnium Gatherum amongst many others.  In due time metal fans around the globe will be split into two  groups – Those who already are HEXED and those who are about to be!

Are you HEXED yet?