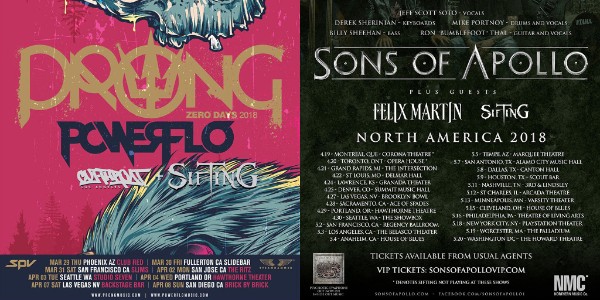 CA’s modern prog rock/metal outfit Sifting have just been confirmed as support for two different upcoming U.S. tours. The band will be supporting Prong (March 29 – April 8) on the West Coast, and then supporting Sons of Apollo (April 21 – May 20) nationwide. Sifting’s latest full-length album Not from Here, was released in 2017 via Eclipse Records. The album was produced by Ryan Williams (Velvet Revolver, Rage Against the Machine) and Steve Evetts (Sense’s Fail, The Dillinger Escape Plan, Suicide Silence).

So far, the band has released four music videos promoting the album for the songs ‘Epsilon’, ‘Blowing Fire’, ‘Nothing but Us’, and ‘Not from Here’; with a fifth currently in production for the song ‘Gloom’. Fans may also watch a studio playthrough video for the song ‘Epsilon’ at this location.

SIFTING on tour with PRONG

SIFTING on tour with SONS OF APOLLO

I cannot repeat enough how highly I regard Tommy Victor as a musician. Since I first saw the Beg to Differ video on Sky Channel some time in 1990, Victor and Prong have had a big place in [Read »]