This New album is the second part of a concept based on the tragedy of W. Shakespeare “Hamlet”. Here we are representing Ophelia the true heroin of this masterpiece. It’s a point of view very different and a very particular choice for us. For the second time we have choosen to use a female theme to our album. But with this story is the possibility to present the state of mind and the inner conflict of a young woman. This virgin is the key of the tragedy. A kind of mirror that reflect a deep emotion and a sensitive vision of the human sensations : love, treason, revenge, pride, fear and more. Finally the death is maybe another hero inside this drama. It’s the true winner ! All lyrics speaks about the end and the idea of the soul after life. This album is a kind of book of “life and death” with a pretty music to organize the subject. We cannot say : hamlet is fun. But we can prove our music is fun! It ‘s really our Best offering…

What was the goal with making this album?

As for us this album is the result of a very long process. After septentrion’s walk our second opus we would change the manner to create our music. I Wasn’t satisfy to my voice and my work. I said : i’d like to make a strange album, more loud, more dark and more powerful. But ov asylum was too trash and too dangerous for the fans. The orchestral parts and the symphonic style were too absent. Now, with ophelian fields, i think the mixture of the past and present is perfect. We are proud to present this new album : a progressive evolution of our universe and an honest gift for the fans. I’m sure of it. It’s the New face of the band, the future. I hope People like that.

Any specific influences towards music or lyric subject?

In fact it’s a very difficult question because we cannot find inside one band or one artist all the influences and all the sensation that we love. I think we cannot reduce a style to a music. The style is linked to an epoch, a high manner to understand the human emotion. It’s also a question of taste, a question of state of mind. Well, it’s a very hard question ! But maybe we can find a genuine creation in the beginning of the hard rock music. During the seventies, i think Alice Cooper was the reference and a precursor. I think during the eighties he was a reference too. Again and again. It’s maybe the sole musician with the best musical culture. He has played hard rock, progressive rock, heavy metal, glam rock, shock rock, trash metal, psycho metal and more. He created the rock’n’roll circus, the idea of the concept album, all the atmosphere of a good show and it’s really a true frontman. Cooper is not an opportunist but a real man of vision. Currently we lost that!

How long did it take to make this album?

One year between the composition, the recording and the mixing process 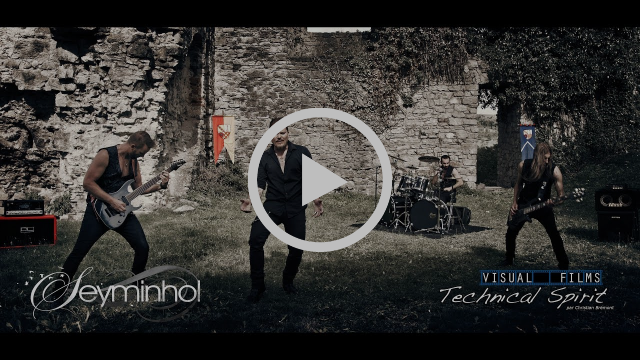 And here is the new video from Seyminhol’s upcoming amazing album Opheilan Fields!