All headliners for COPENHELL 2019 are now ready, with ten new bands added and SCORPIONS as Saturday’s great concert.

The COPENHELL 2019 line-up has just been expanded with ten new bands that span all the hard end heavy genres, from retro rock to modern metal. The headliners for all festival days are now on the poster, and we will continue to add more bands and events as we get closer to the festival. 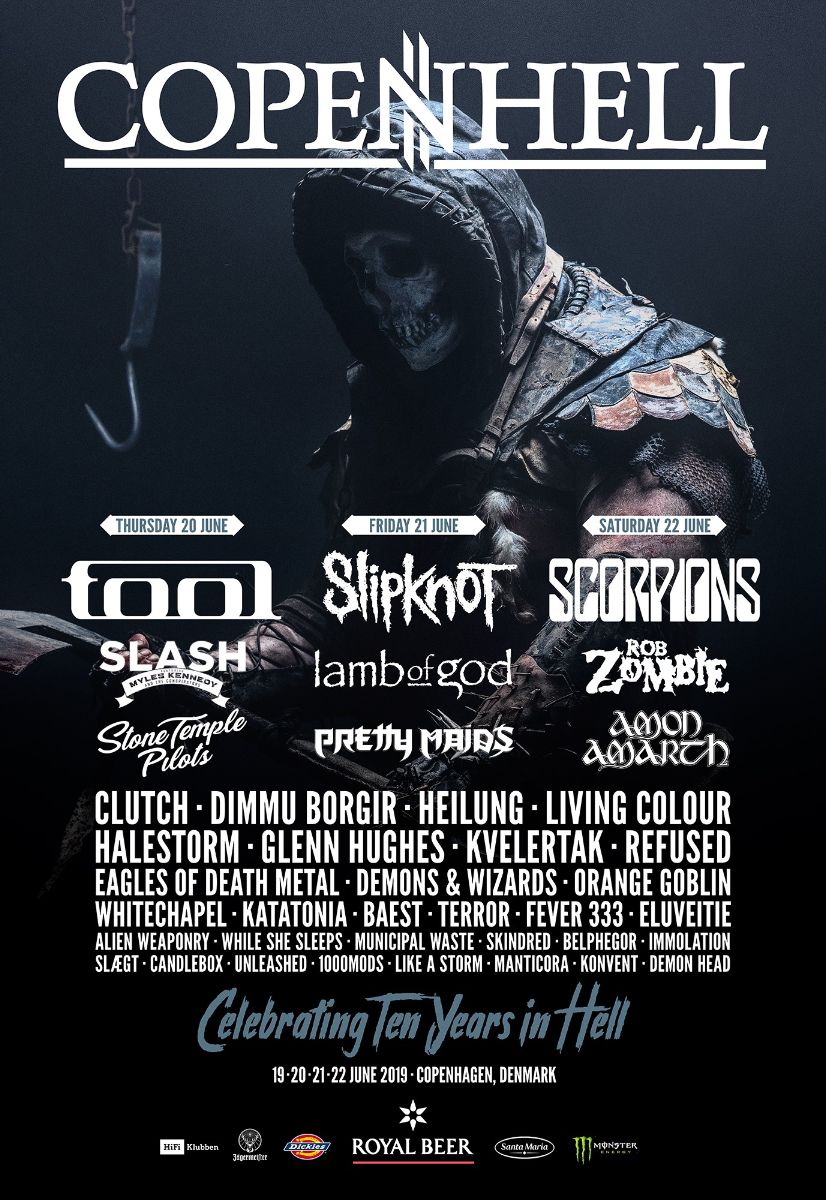 In 2016, the German rock legends from SCORPIONS delivered a truly stunning concert in the craziest weather we have ever experienced at COPENHELL. Electricity was crackling both in the sky above the festival site and between an almost supernaturally proficient band and a completely euphoric audience when the incredibly enthusiastic musicians went on their tour de force. They have toured the world since then, and even though these seasoned people have surpassed their 50-year anniversary years ago, their stinger is as sharp and pointy as ever. In many ways, this band is to hard rock what Black Sabbath is to heavy metal, and they have shown a great musical span throughout their more than half a century-long career.

As Saturday’s headliner, these rock pioneers will close COPENHELL 2019 with a blast of a performance, with everything from epic ballads to electrifying rock classics.

PRETTY MAIDS are one of the first acts that will pop up in most Danes’ minds when you think ’classic Danish heavy rock’. Ever since the beginning in 1981, this prolific band has managed to maintain their style, nerve and creative spark through 15 studio albums. They have held a consistently high standard throughout the years, and the albums “Pandemonium” and “Motherland” from 2010 and 2013, respectively, are by many fans seen as their best ever. These heavy Danish rockers have been a solid force on the both the Danish and the international scene for several decades, and it a great pleasure for us to welcome them back to COPENHELL this year.

LIVING COLOUR rose up from New York’s underground scene and within a few years, they became world stars with their energetic funk metal and not least their 1992 mega hit ”Cult of Personality”. Since then and all the way up until their 2017 album ”Shade”, these phenomenally skilled musicians, fronted by Corey Glover’s formidable vocals, have delivered and developed their truly original and unique genre mash-up of metal, rock, funk, jazz and hip-hop. Count on one big party of a concert!

Deep Purple’s former bass player and singer GLENN HUGHES, also known as ”Voice of Rock”, performs together with a rock super group today. They will visit COPENHELL with their ”Glenn Hughes Performs Classic Deep Purple Live” world tour, which pays homage to one of the music history’s most influential rock bands. This concert will be an absolute hurricane of nostalgia when the band plays that magical music from the 70s that started it all.

One of Swedish death metal’s “Big Four” will visit COPENHELL 2019 when UNLEASHED release their furious and ice-cold oldschool metal. Insanely heavy, explosive riffs carried by a musical primal force can be expected here. Where many other bands have developed their concepts with progressive influences, these old warriors have stuck with their original sound – and thanks a lot for that! Every fan of classic death metal will feel sheer joy from the moment when Johnny Hedlund’s wild scream resounds across the festival site!

The Danish band SLÆGT returns to COPENHELL with their blackened heavy metal. Young meets old in a sound that is both traditional and progressive. The lyrics focus on the supernatural and the occult and have a very familiar 80s heavy metal vibe. They are mixed effortlessly with raw, grating black metal vocals, complete with battering ram-style blastbeats and painfully insisting guitar riffs into an amazing sound picture.

The American rock band CANDLEBOX showed up right in the middle of the grunge wave that rolled up everywhere in the early 90s. Rather than surfing on it, they stuck with classic blues rock and a more polished sound, which resulted in several great radio hits. Lead singer Kevin Martin’s intense voice has carried the band’s sound ever since the beginning, and his vocal chords are still in top form on both their most recent albums and their current tour.

Through almost 30 years, the highly respected and influential band KATATONIA has been on a true voyage of discovery through the hard and heavy music’s subgenres. They have moved from death and doom, across more traditional heavy metal to a more progressive rock sound, with everything being assembled masterfully into a modern and complex sound. The band will visit COPENHELL 2019 on their 10-year anniversary tour for their seminal album ”Night Is The New Day”, which they will perform during this concert (Note: KATATONIA will perform on Wednesday, June 19).

The pedal will be taken to the metal when the Danish band MANTICORA fires up their music at COPENHELL 2019! These heavy boys deliver their thrashy, progressive power metal at an absolutely ferocious pace, which will make all speed metal fans very happy. The band released their eighth studio album last year, and lots of experience and technical skill are evident in their music. The efficient mix of styles and the fascinating horror lyrics are a true treat for all power metal fans.

The Copenhagen quintet DEMON HEAD plays diabolical retro rock inspired by 60s acid rock and 70s proto metal. This includes double guitar solos – one of their defining characteristics – occult themes and heavy, slow songs vibrating with the sinister feeling of impending destruction. A must for all doom fans!

COPENHELL 2019 has had the fastest-selling tickets in the festival’s history, and both 4-day tickets and Thursday tickets are sold out.

Purchase tickets, read much more about the festival and all of the bands at Copenhell.dk or in our official COPENHELL app  – and follow us at Facebook, Spotify and Instagram.

Pretty Maids is a life-long companion of mine; their two stellar 80s releases “Red, Hot and Heavy” and “Future World” are important parts of the soundtrack of my youth. Being the local heroes from Horsens, [Read »]