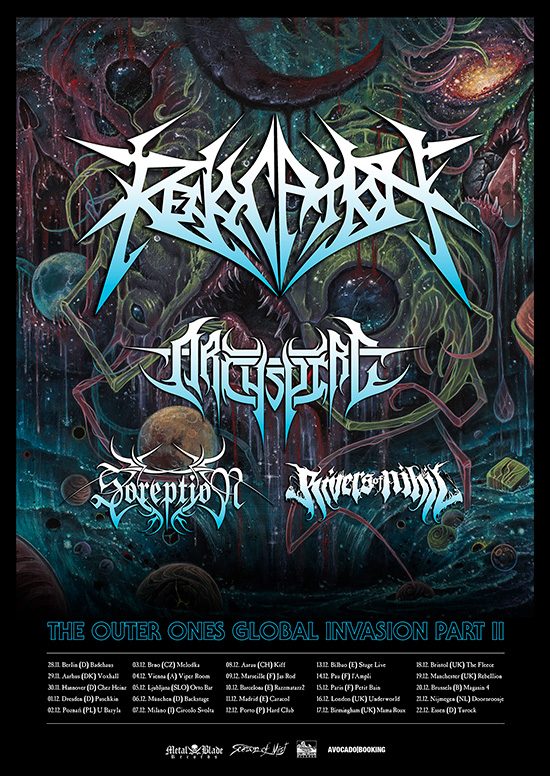 On September 28th, REVOCATION will release their new album, ‘The Outer Ones‘, via Metal Blade Records. For a preview of ‘The Outer Ones‘, a video for the first single, ‘Of Unworldly Origin’ (directed by David Brodsky), can be viewed at: metalblade.com/revocation – where the record can also be pre-ordered in the following formats:

–opaque cyan / aqua vinyl (US exclusive – limited to 250 copies)* exclusive bundles with a shirt, plus digital options are also available!

Two months later REVOCATION will head over to Europe for a full headliner run. Comments REVOCATION:

“We are very excited to announce our first headline tour across Europe! We’ll be playing a bunch of new music off “The Outer Ones” along with some classics and a few deep cuts as well. Also joining us on this excursion are the tech death masterminds in Archspire, Soreption and Rivers Of Nihil. This tour has been a long time in the making, thanks to all our fans that have helped to grow this band overseas, we cannot wait to headbang with you all!”

‘The Outer Ones‘ has been produced by Zeuss (Hatebreed, Bleeding Through) and sees REVOCATION pushing both the death metal and progressive elements of their signature sound harder than ever. “I knew that I wanted to go in a darker direction, and this is our most death metal album to date,” states vocalist/guitarist Dave Davidson. “Sometimes when death metal bands go down the prog route they lose some of that edge, but we wanted to keep the aggression at the forefront of what we do while still pushing our boundaries.” Moving away from the societal and historical themes that informed 2016’s ‘Great is Our Sin‘, this time Davidson has immersed himself in the fantastic, evoking one of the great writers of the sci-fi/horror genre. “The title is my ode to H.P. Lovecraft and the entities of pure cosmic horror that rule that universe he created. Since the new music we were writing was so evil and spacey in sections it seemed to be the right title to fit the overall vibe. But while the lyrical content is largely influenced by such writings, in every allegory there is of course some reflection of the real world, so I enjoy writing in a way that could have one overlaying meaning and then another deeper, symbolic meaning as well.”

‘The Outer Ones’ track-listing

2. That Which Consumes All Things

“‘Monarchy’ is not only their darkest record to date, but their most dynamic, atmospheric and powerful” – 9/10 Outburn Magazine “‘Monarchy’ is the gold standard for extreme, technical, progressive, and passionate death metal right now, [Read »]