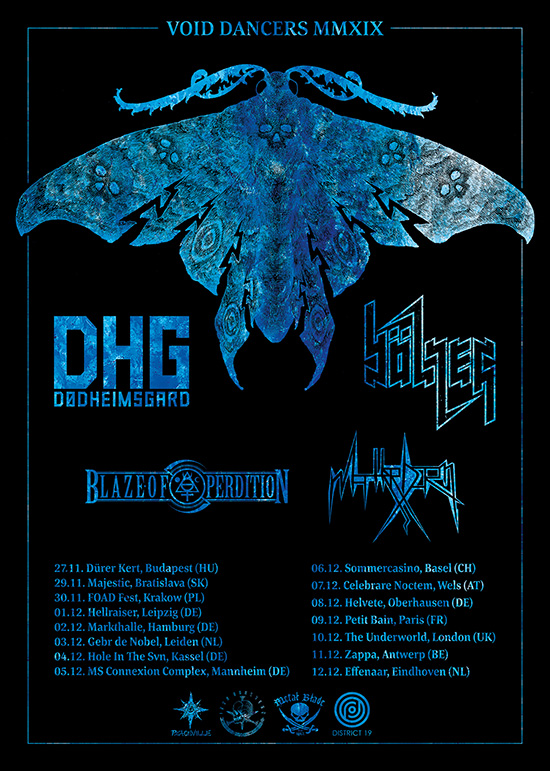 Polish Black Metallers BLAZE OF PERDITION have been confirmed as support for the “Void Dancers MMXIX Tour” taking place in November and December throughout Europe! Co-Headliners will be Swiss legends BÖLZER and infamous Norwegians DHG. Opening up each night will be MATTERHORN!

“We are proud to announce our first serious fruit of collaboration with District 19 and Metal Blade Records. We are returning to Europe, this time as part of Void Dancers MMXIX tour, together with such great acts as DHG, Bolzer and Matterhorn. We are going to play some stuff from the upcoming album “The Harrowing of Hearts” and – as a foretaste – there will be a new single/EP containing one new song and a cover available for you to buy on the gigs!”

BLAZE OF PERDITION was founded in 2007 by guitarist XCIII and started its activity by releasing a split CD ‘In the Void and Serpent, the Spirit is One‘ with the Russian band Pseudogod. The band’s line-up changed numerous times over the years, however XCIII and Sonneillon remained the source of all musical and conceptual content. November 2nd 2013 turned out to be fatal as the band’s bassist died in a car crash on tour and the vocalist Sonneillon became unable to participate in live activities due to his serious injuries, however remained important in the band’s creative process and responsible for the studio vocal recordings, lyrics, graphic design as well as contact with the media.

BLAZE OF PERDITION recorded four full-length albums and is currently working on the fifth one, planned for release in late 2019, early 2020.