Legendary, genre-defying and long-running progressive death metallers PESTILENCE, originally established in the Netherlands in 1986, have signed a worldwide record deal with Agonia Records, by the courtesy of Hadeon Records. The band is currently working on their new album titled “Exitivm”.

From auspicious thrash metal beginnings, which earned them a deal with Roadrunner Records, to a spot-on death metal transformation, which turned them into a genre pioneering phenom, PESTILENCE is alive and kicking after decades since its fateful inception in 1986. Labeled on the same genre-defying scale as Death, Cynic and Atheist, but also Obituary and Deicide, with whom the band shared the same label-home throughout the 90s, PESTILENCE exists as an influential, innovative and distinctive player, despite a turbulent history featuring two breakups (in 1994 and 2014) and reunions (in 2008 and 2016, respectively). The band’s binding factor and leading creative force throughout all cycles has always been founder and guitarist Patrick Mameli. The latter had this to say about the signing:

“Pestilence and Hadeon Records [the band’s own imprint] are very excited to be joining forces with Agonia Records in an exclusive, worldwide agreement to explore new pathways in writing history together”.

Mameli is currently the sole original member of PESTILENCE, whose input blazed the trail for generations of progressive death metal. But he wasn’t alone at that. The band started as trio comprising Mameli, Randy Meinhard (guitars) and Marco Foddis (drums), later joined by another death metal legend, Martin van Drunen (similarly to Mameli, currently the sole original member of Apshyx). This line-up continued through two full-length albums (with the exception of Meinhard, who was replaced by Patrick Uterwijk shortly after the band’s first album, “Malleus Maleficarum”, in 1988). Out of the two, the second album, “Consuming Impulse” (1889), was the beginning of all things great for PESTILENCE. Introduced into Decibel Magazine’s hall of fame in 2013, the album marked PESTILENCE’ shift from intense and raw-sounding thrash to heavier, more haunting and then-buzzing death metal. Not only Martin van Drunen’s vocals turned to acidic growl; PESTILENCE was boosted into international recognition, being at the forefront of the scene with Death, Obituary, Sepultura, Morbid Angel, Bolt Thrower and Autopsy.

Faced with the necessity of replacing a member, after van Drunen’s departure to pursue a career with Asphyx, Mameli enlisted another famed musician, bassist Tony Choy (of Cyinc at that time), and took over vocal duties for good. Together, they recorded “Testimony Of The Ancients” (1991), nowadays regarded as a death metal classic. The material wasn’t as abrasive as previous works, and the musicianship clearly matured, while the album boasted refined production thanks to Scott Burns of renowned Morrissound Studios, Florida. The demand for PESTILENCE elevated as never before, and was followed by massive touring and a legendary performance at Dynamo Open Air.

Eventually, Choy, who wasn’t a permanent member, left the band and returned to Florida to play with Atheist. He was replaced by Jeroen Paul Thesseling (later a member of Obscura). With this addition to the line-up, PESTILENCE released “Spheres” in 1993. It was their last album for Roadrunner Records, yet first to incorporate jazz fusion elements into their death metal landscape. Needless to say, the album was ahead of its time. Underestimated at first, the bold conjunction of genres presented on “Spheres” paved the way, and later on influenced a lot of bands, including Gorguts, Necrophaigst and Obscura. At the same time, the album divided the band’s fans, with some recognizing it for the stroke of genius it was. 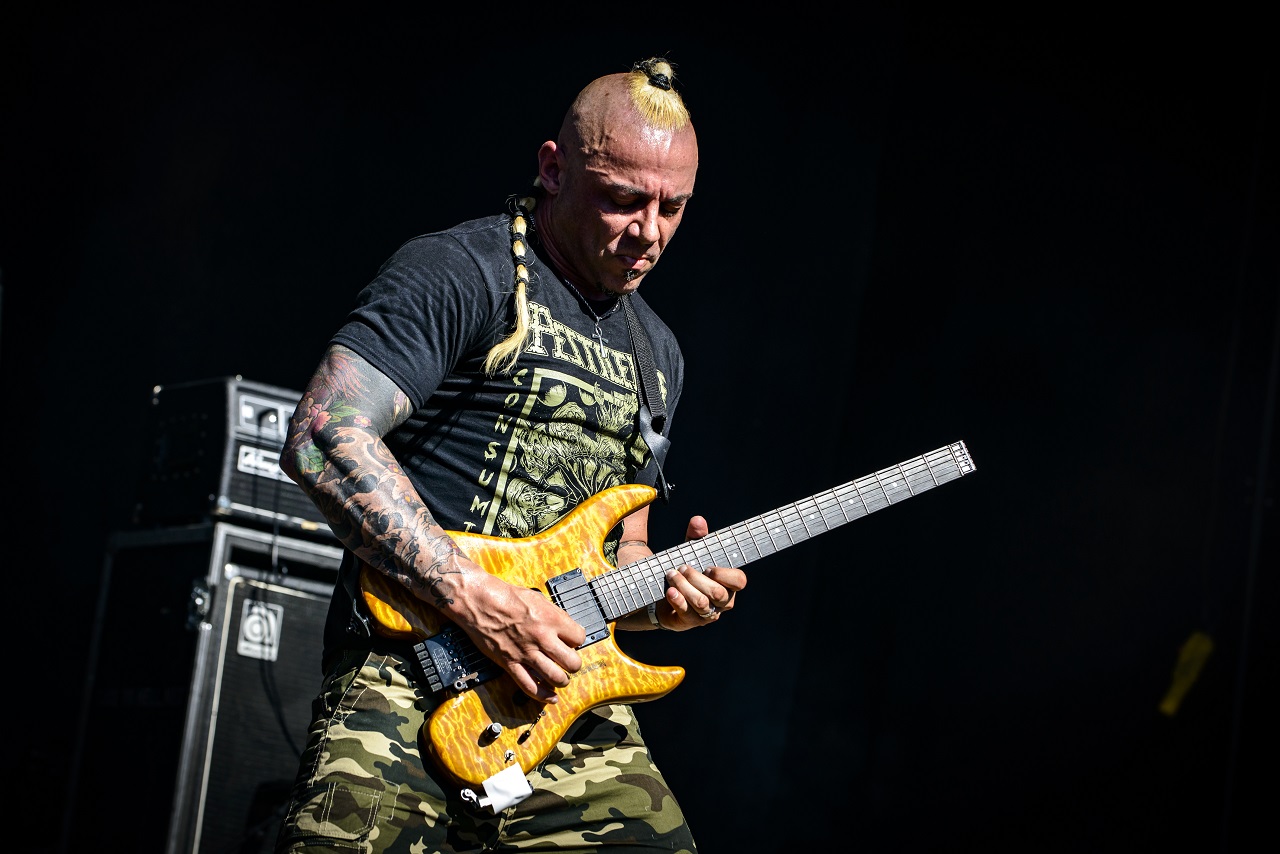 After “Spheres”, tensions within PESTILENCE started growing and led to the band’s first split up in 1994. This left PESTILENCE dormant for over ten years, if not to count a “best off” album issued by Roadrunner Records as well as several other re-releases, many of which were issued without the band’s awareness or consent.

Mameli revived PESTILENCE for the first time in 2008, bringing bassist Tony Choy, drummer Peter Wildoer, and later also guitarist Patrick Uterwijk to the table. He began writing music for an early 2009 release for Mascot Records, perversely titled “Resurrection Macabre”. Alongside a summer North American tour which followed, these were the band’s first activities in fifteen years. Together with Candlelight-era releases, “Doctrine” (2011) and “Obsideo” (2013), which both saw further line-up revisions, these “first reunion” albums differed in sound, boldly exploring and pushing the boundaries of death metal’s brutality and technicality.

Always a restless soul, Mameli surprisingly put PESTILENCE on permanent hold in 2014, aiming to fully concentrate on his side project, Neuromorph, and willing to explore other forms of metal. Fortunately enough, in comparison with the first breakup, this one lasted only two years, and saw the band reunite under Mameli’s lead in 2016. The re-established PESTILENCE (featuring, except Mameli, bassist Tilen Hudrap of Testament, guitarist Santiago Dobles of Cynic and drummer Septimiu Harsan) pursued a contract with the band’s native Hammerheart Records, after several constructive meetings (which also encompassed the re-release of PESTILENCE’ early works). At the same time, Eternal Rock Music Agency became the bands booking agent.

PESTLIENCE’ last album, “Hadeon”, was released to acclaim in 2018, taking everyone by surprise with a nod towards the band’s early death metal years, yet still nourishing their experimental expression.  The album was released in sync with an extensive European trek, followed a South American run and many other shows throughout 2018, only to begin 2019 with even more touring across UK and Europe. This summer, among many other shows, PESTILENCE played at Netherlands Deathfest 2019 (NL), Maryland Deathfest 2019 (USA), Metal East Fest 2019 (UA), Dokk’em Open Air 2019 (NL), Goathell Fest 2019 (HU), In Flammen 2019 (GER) as well as at an exclusive concert in Singapore. Later this year, PESTILENCE is confirmed to perform at Leyendas Del Rock 2019 (ESP), Iberian Warriors Metal Fest 2019 (ES), Kaltenbach Open Air 2019 (AT) and is set to play an exclusive show in Tokyo, Japan in October.

The next PESTILENCE album is always a mystery, in a good way, so keep a lookout for more news surrounding their debut release for Agonia Records, titled “Exitivm”. 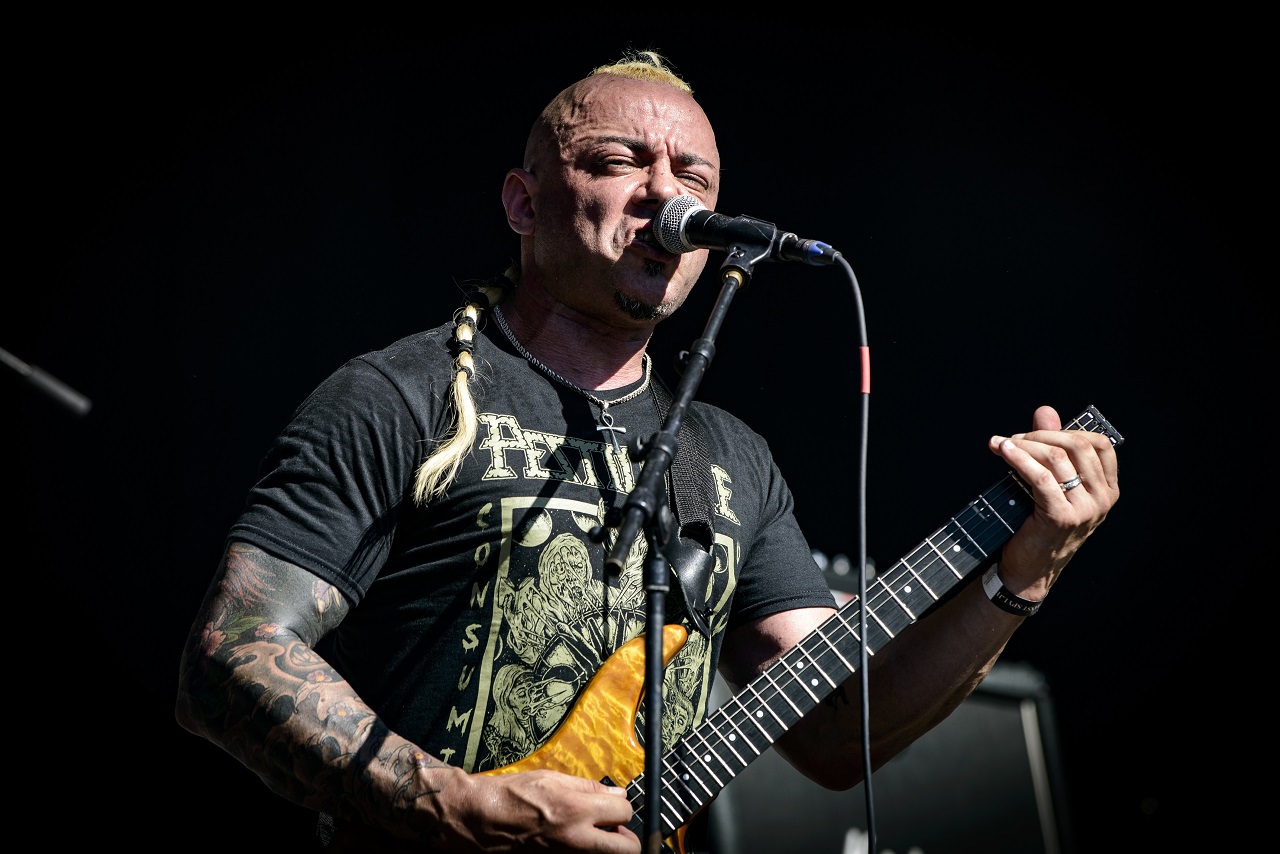