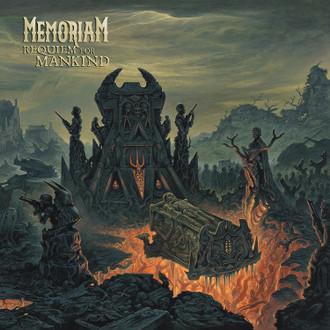 The war rages on! The third album from old school metal veterans MEMORIAM, »Requiem For Mankind«, is out now. Just a year after the release of their second album »The Silent Vigil«, the band returns with an authentic, raw offering packed with old school death metal destruction.

While their debut album “For The Fallen” (2017) was heavy, depressing and marked by grief, the second work “The Silent Vigil” (2018) showed a relentlessly aggressive side. It was without question another great album, created by musicians who blindly understand their craft yet do not repeat themselves.  This also applies to the third and latest string to their bow »Requiem For Mankind«.

Once again, the groove is monstrous, the riffs are merciless, and the atmosphere is oppressive, paralyzing, even overwhelming. Willett’s aggressive vocals are rousing and relentless.