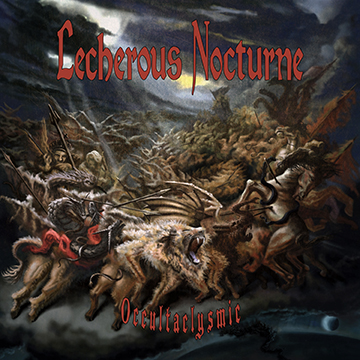 USDM war machine LECHEROUS NOCTURNE are set to launch it most lethal assault to date with the April 6 release of Occultaclysmic.

The culmination of a 20-plus year journey through chaos, the fifth chapter in this genre-defying band’s legacy draws from realms previously unexplored, further twisting the standard definition of extreme metal.

“Occultaclysmic is darker, more chaotic, and much more brutal, drawing more influence from blackened and atmospheric masterpieces than previous releases. The structured evolution of our musicianship is at an all-time high, resulting in a torturous opus that will leave death metal fans craving more!”

Occultaclysmic was engineered by Jarrett Pritchard.

Since their debut in 1997, LECHEROUS NOCTURNE have pushed the boundaries of death metal to extreme limits and even crossed the threshold through the blackened spectrum, abolishing any limitations some may confine to most technical subgenres. Conventional song structures and solos are void in their songwriting, with only the drive of leaving a ferocious trail of technical viciousness in their wake. The strength of their self-titled E.P. landed the band a two album deal with Unique Leader Records, which was followed by a series of nationwide tours with the biggest names in the genre. After touring on Behold Almighty Doctrine, the group inked a deal with Willowtip Records for the release of Occultaclysmic.