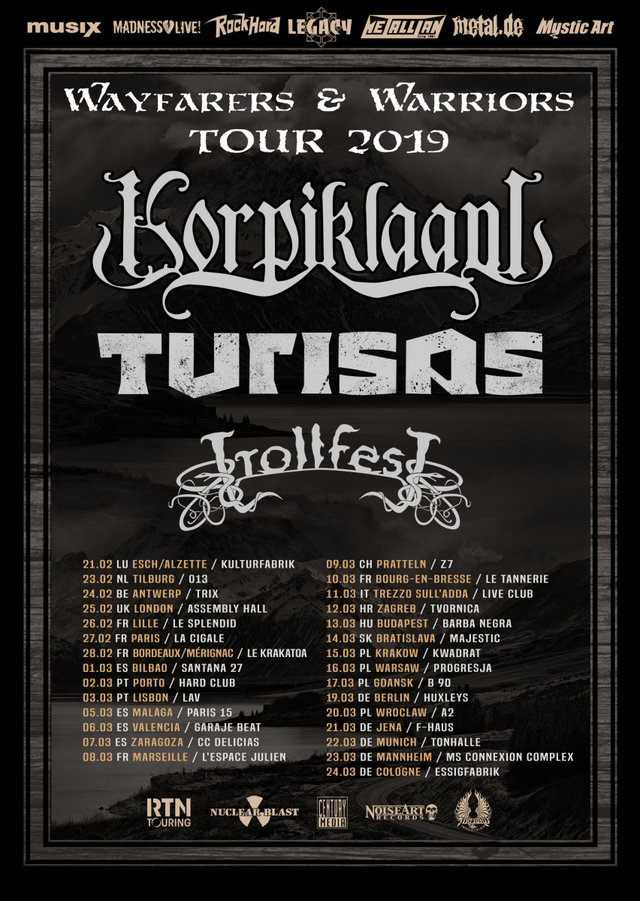 Finnish Folk Metal Superstars KORPIKLAANI released their brand new studio album titled »Kulkija« (“Wanderer”) on September 7th, 2018 through Nuclear Blast Records. Just a few days before they embark on a North American headline tour with ARKONA (all dates can be found below), the band has launched another lyric video – once again created by Jan Yrlund – for a song taken from their latest offering. Check out ‘Kuin korpi nukkuva’ over on YouTube: https://www.youtube.com/watch?v=q1HnD86aWS8

“For some reason while recording the first demo of this song I kept hearing it as a traditional tango. I haven’t been able to drop that thought and while playing this live I still hear the tango and drag behind the beat like Topi Sorsakoski. I wanted to leave a trace of that original form and therefore there is a bit of tango in the end of the song. So the tango is not a joke even if it may sound that way. Of course it is also possible that there is a tongue or even two in cheek, but that was the case with Sorsakoski too.”

In a certain way this is a nice and light song, but still also strong and even a little sad. Tuomas Keskimäki’s lyrics are in line with that. The basic message of the lyrics is the importance of living in the moment, which is also one the fine features of KORPIKLAANI. This band has always been able seize the moment and enjoy life right there and then.

A wanderer dreams of an easy journey on an even road, with the girl of his dreams beside him. Returning home, he feels that he does not belong anywhere. The wanderer does not want to wake, as life is rife with fears and worries. At the end the dream the girl picks a dead flower, he wakes up, he realizes that he must live for today and not for tomorrow.

Imagine being in a (successful) band and writing new songs. But the new songs sound completely different from what your band is used to play. But you like the songs and you need to record [Read »]

Together with their friends in ARKONA, they are going to play shows in Eastern and South-Eastern Europe in late October/early November. Guitarist Cane states: “We are really excited to announce this east european run with [Read »]