KEN mode are now streaming their entire new album ‘Loved’ in full, which has been slated for worldwide release on August 31st, 2018.

‘Loved’ is exclusively streaming via Metal Hammer at the link below!

Regarding the album, Jesse Matthewson comments:

“With ‘Loved’ our entire album was influenced by the cover piece – ‘Happy Person Having a Pleasant Conversation in Public’, which Randy debuted Sept 26, 2016. We knew from the moment he posted it that we needed this to be the cover to our next work – ‘Loved’, which we had earmarked shortly after we’d finished recording ‘Success’. For Randy, we know the piece is a bit of an encapsulation of his relationship with sleep paralysis, but for us, it’s come to represent the face of ‘responsible’ adult life in 2017/2018. In late 2016 he printed stickers for the piece, just as a bit of a promotion – but I kept one of these stickers on my dresser from that moment on…our eyes meeting every morning upon my waking; every day, for the entire year we worked on ‘Loved’. I felt like this ritual encouraged an artistic arms race, where we had to create an album that would live up to the ecstatic nastiness of this image. We were also just generally fed up with much of what life in 2017/18 has come to represent, working in the music industry in general, and wanted to create something wholly noisy and ugly, yet with an underlying humor – because if you’re not laughing these days, you’re probably crying..” 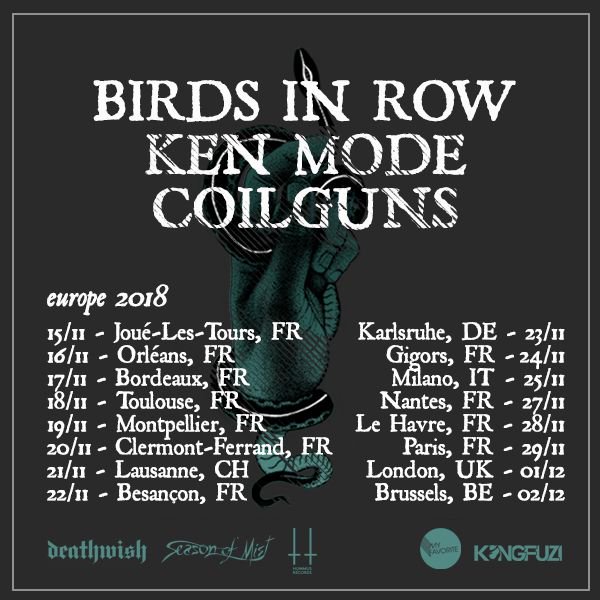 KEN mode will be touring in support of their new album ‘Loved‘. The unnerving cover art, created by Randy Ortiz,  can be viewed together with the album details below. 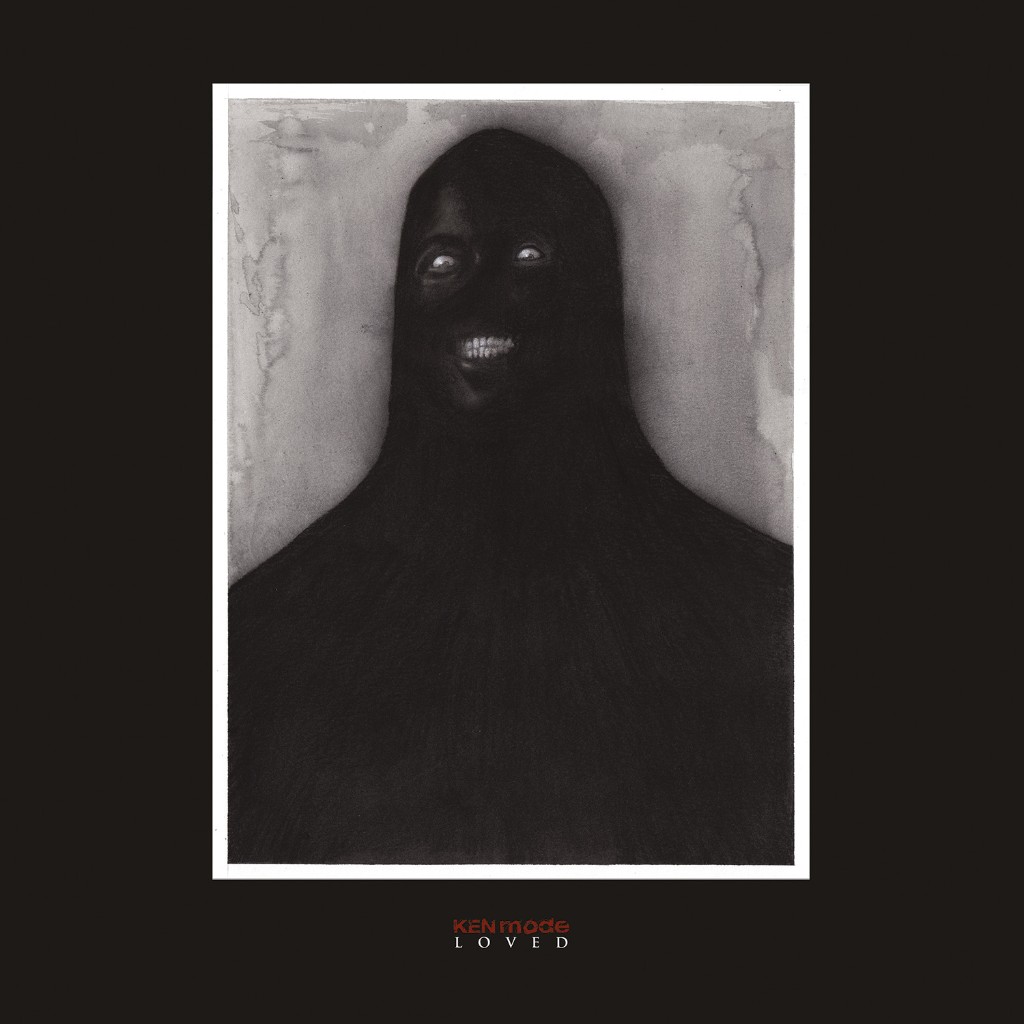 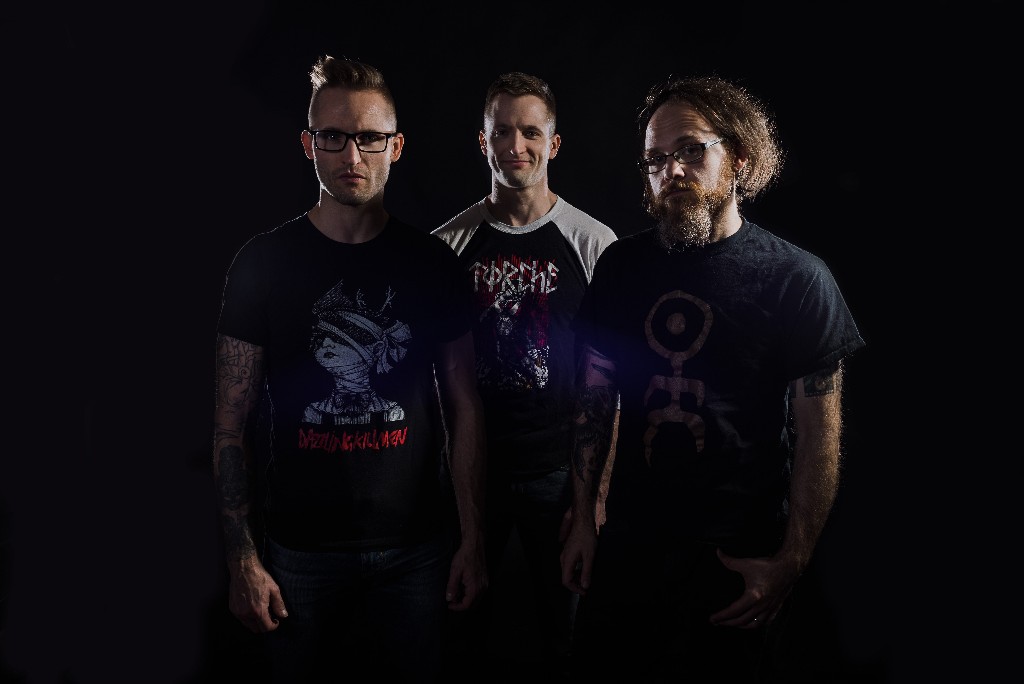 Kill Everyone Now mode – an ethos legendary Black Flag frontman Henry Rollins would use to describe the band’s state of mind while taking the stage for the endless touring cycle of their genre defying classic album, ‘My War’. This proved to be the psychological foundation / attitude for the project brothers Jesse and Shane Matthewson formed in 1999 in their home of Winnipeg, Canada and that would see them spread a manic form of metal and hardcore infused with noise rock for their entire adult lives. Cutting their teeth in the early aughts with a pair of records ‘Mongrel’ (2003) and ‘Reprisal’ (2006), KEN mode rose from underground notoriety with their JUNO award winning album ‘Venerable’ in 2011. This marked a decided shift for the band, embarking on an unrelenting touring schedule for the following five years with acts such as RUSSIAN CIRCLES, TORCHE, DEAFHEAVEN, KYLESA, REVOCATION and TODAY IS THE DAY, followed up by Season of Mist-released full lengths ’Entrench’ (2013) and ‘Success’ (2015). Those records saw the band hit a multitude of major festivals like SXSW, Hellfest Open Air, CMJ Festival, Pitchfork Festival Chicago, Hopscotch Festival, and Roadburn Festival; and even doing live sessions for renowned institutions such as BBC Radio 1 and Daytrotter. But burnout was inevitable, and in 2016 KEN mode took a step back to regroup. Core members Shane and Jesse formed their own music business management services company, MKM Management, while bassist Scott Hamilton released records with his other bands ADOLYNE and GREYLIGHT DISTRICT. In 2017 the band began writing with a newfound focus and desire, in the most collaborative effort they have ever put together. ‘Loved’, the band’s brand new vicious full length may be the KEN mode’s quintessential statement of violence and despair made sonic. Drawing from not only the desperate noise and industrial sonics of the ‘80s and ‘90s, the band mixes in the decidedly more extreme tone and presence of death and black metal, expertly captured by Andrew Schneider’s (UNSANE, CAVE IN, DAUGHTERS) sick vision of noise and girth. ‘Loved’ represents yet another pivot point in the group’s sound, a departure from the indie/noise punk focused ‘Success’ album. The group delves deeper and darker than ever before.