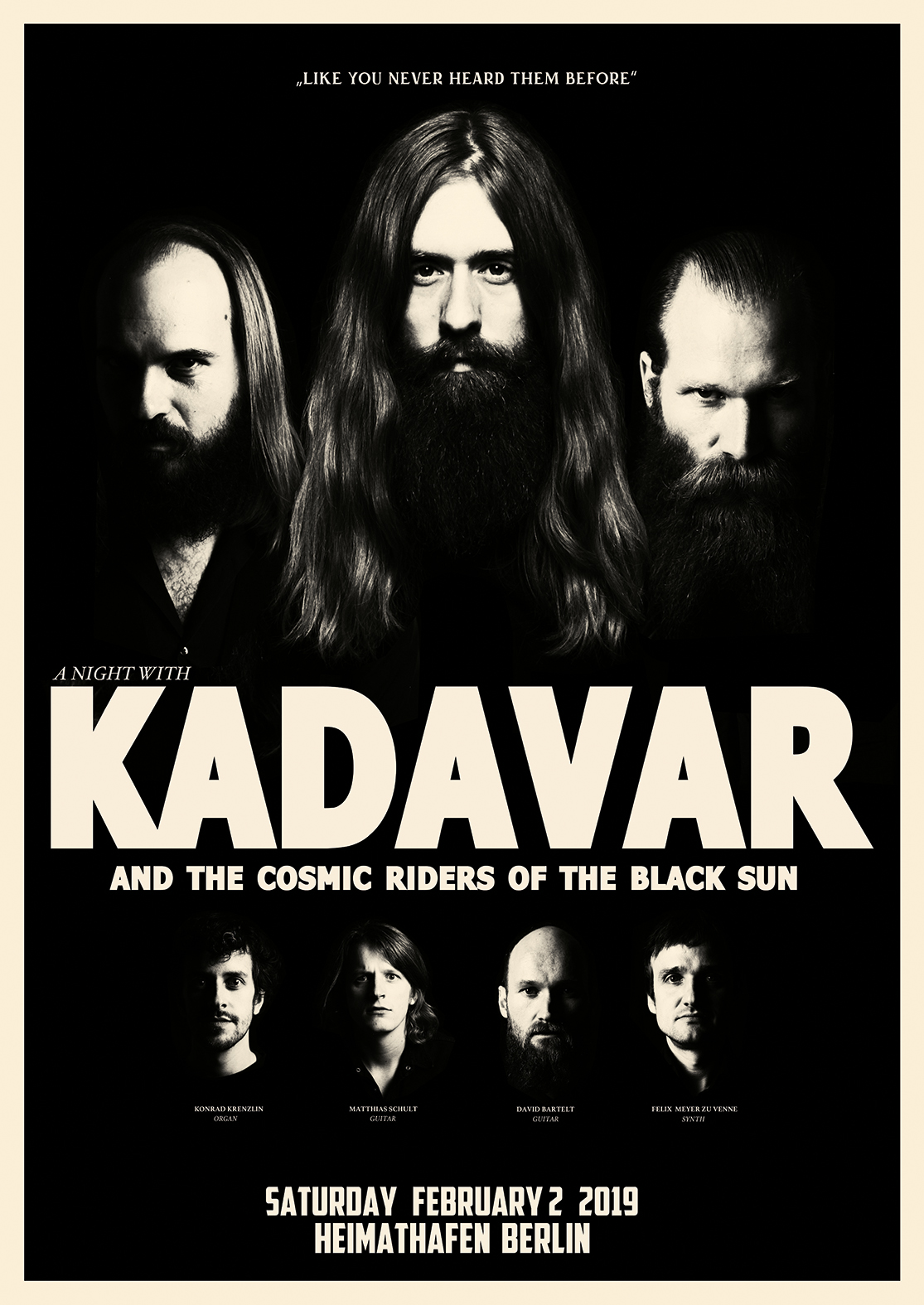 With four studio albums in the pocket and tours all over the world, you could say KADAVAR would gratefully take a break when there´s a chance. Yet, they took the time in 2018 to start another adventure.

Despite their reputation of a three piece powerhouse, they have been contemplating the idea to themselves with guest musicians for quite a while, as singer and guitarist Lupus Lindemann explains:

„Ever since we released »Abra Kadavar«, I´ve had the feeling something was missing on the recordings. I was fascinated by the idea to have a big band around us and let the songs flourish with different sounds.“

Thoughts which seem more understandable when you keep in mind KADAVAR wrote and recorded their second studio album in only  two weeks giving everyone the middle finger who thought they would sell out after signing to Nuclear Blast records in early 2013.

Five years later, the band decided to give it a try and started to rehearse with Matthias Schult (HEAT) on second electric guitar, followed by Konrad Krenzlin (OPERATORS) on the organ. With the two Berlin based guest musicians, the band started to revisit and rearrange material which normally would not be played on a regular live set.Out of the excitement for growing song structures and a more spaced out, thickly layered soundscapes drummer Tiger Bartelt asked his older brother David to join the project and bring in his classical guitar skills. Shortly after that Felix Meyer zu Venne, also known as the avant-garde noise generator RAUNE, joined the band that now calls themselves THE COSMIC RIDERS OF THE BLACK SUN. They will put up a one-off show at Heimathafen, Berlin on February 2, 2019 and expose material of KADAVAR in a different light.

Or as Tiger puts it: „When we play as a trio, it´s all about raw power. It´s about taking all the space. Playing with a bigger group, you need to create space for each other.“After their sold out Show at Festsaal Kreuzberg, this will be a rare chance to experience the music of KADAVAR like you never heard them before. Surrounded by new sounds and colors, creating a universe on their own.

KADAVAR & THE COSMIC RIDERS OF THE BLACK SUN

Get an idea of what KADAVAR & THE COSMIC RIDERS OF THE BLACK SUN are all about: https://youtu.be/e6sxt3qGRNs

Order tickets from this location.

KADAVAR had released their fourth album, »Rough Times«, in September 2017 via Nuclear Blast and been touring relentlessly ever since.

‘You Found The Best In Me’ music video: https://youtu.be/TzCp2Hriz94

‘Into The Wormhole’ music video: https://youtu.be/UaAR5nlnlQ0