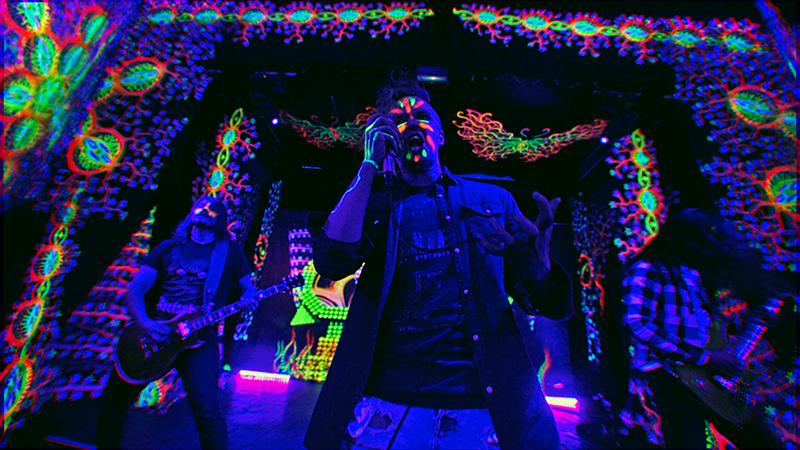 Inkvisitor’s 2nd full length album Dark Arts of Sanguine Rituals saw the daylight in April. Now the band has released a third single from that album, entitled Necromancy Cascade, accompanied by a psychedelic music video. The tracks simultaneously both the most mellow and most twisted tune on the album.

The video is filmed at Gloria, Helsinki in the middle of an installation art by Flowers of Life. The video was both directed and edited by the guitarist Jesse Kämäräinen.”Gloria had hired the Flowers of Life collective to construct and decorate the whole place. It looked pretty freaky, and since they had one day free, we decided to shoot the music video there. The results surely step out considering other metal music videos.” The guitarist Jesse Kämäräinen tells about the video.

Inkvisitor is a thrash metal band from Jyväskylä, Finland. The band was formed in 2012 and it has previously released EP Delirious Tales (2014) and Doctrine of Damnation (2015). In 2016 the band went through big line-up changes and once the line-up was whole again, the band entered the studio to record their second full length album Dark Arts of Sanguine Rituals. The album was released today. The album is available both digitally and on CD. The CD version is a digipak with 12-page booklet with lyric matching artwork on every page. The CD also includes and instrumental version of the album via dowload voucher.
You can buy the album from band’s Bandcamp or from Recordshop X. The album is also available on all relevant streaming services.

German band Accuser already started in 1986, after 7 full lengths it got a bit quiet till there was a new Accuser album in 2010 (they have been active under the name Scartribe for a [Read »]

Last month I reviewed the new album of the band Raze. That band is going on tour in Spain with Artillery and also on the bill is Phobos Preacher. It will not be a surprise [Read »]