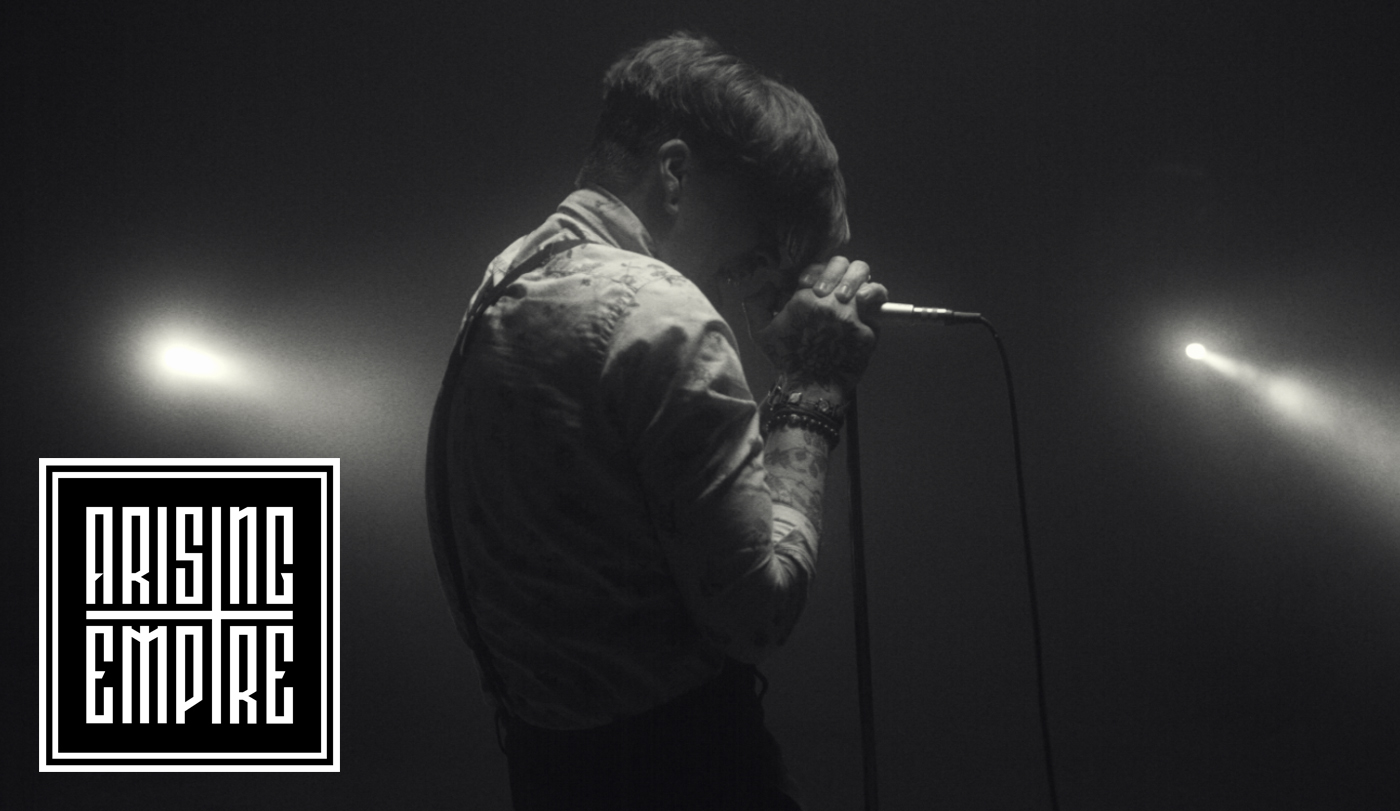 Swedish alternative metalcore outfit IMMINENCE following up the successful releases of the songs ‘Paralyzed’, ‘Infectious’ and ‘Saturated Soul’ with their fourth single ‘Lighthouse’ off their upcoming third full length record »Turn The Light On«, which will be available on May 3rd, 2019 via Arising Empire.

“If there’s one thing we could tell you about writing the new album is that we were never afraid of doing whatever came to our minds. We wanted to cover our entire soundscape and not feeling limited in any way, which is how ‘Lighthouse’ came to life. Ever since we wrote the first tracks of the new album, we started to come back to a harder sound, but never went as far in that direction as we did with this song. However, even though we took a step back into a heavier approach with ‘Lighthouse’, it turned out to be something different than all the other tracks on ‘Turn The Light On’. It calls to mind an older version of Imminence, but in a more refined way taking that sound one step further.”

To celebrate the upcoming release of their brand new record the band starts their own headline release tour together with special guest THE OKLAHOMA KID today!

»Turn The Light On« tracklist:

TURN THE LIGHT ON

The third and highly anticipated album »Turn The Light On« embodies the diversity and vastness in IMMINENCE’s identity of heartrending emotion. A significant milestone in the group’s discography and an exceptional composition of sheer force and fragility that fears no boundaries or constraints.

Since the release of the previous record »This Is Goodbye« (2017), the Swedish alternative metalcore band IMMINENCE have strongly established themselves in the European scene as one of the most up-and-coming and exciting bands on the market today. With the success of their own headline tour and several sold out shows, they have reached a new plateau and are ready to truly distinguish themselves and their sound with their next album.

“The new Imminence album is called Turn The Light On which encourages to shed light on the darkness we carry within. The lyrical theme of the record is inner conflict, self-doubt, depression and self-destruction. Music has always been, and now more than ever, an outlet and a way for me to cope with these emotions. This is my testimony to my mental ill-health. It is the most soul-baring, personal and important piece of work we have ever made as a band.”

Fronted by vocalist and violinist Eddie Berg, guitarist Harald Barrett, drummer Peter Hanström and bass player Christian Höijer; IMMINENCE was formed in the southernmost part of Sweden and have over the years become one of the country’s most promising acts with a diverse sound and universe, embracing everything from metalcore to acoustic music. Founded by Eddie and Harald when they were just teenagers, the band grew organically with a constantly expanding fan-base all over the world while touring actively in Europe since the release of the band’s breakthrough single ‘The Sickness’ (2015).

One step backwards, two steps forward. With »Turn The Light On«, IMMINENCE dives right in to themselves and comes up with a collection of songs that covers the wide musical territory that has become associated with the band over the years. The new record mixes the rawness of the band’s hard-hitting, unrelenting instrumentation with the grandiosity and class from frontman Eddie Berg’s unmistakable melodies and violin arrangements. »Turn The Light On« demonstrates a remarkable musical diversity with each and every song being unique in its sound and message, creating a forcefield that embodies the entity that undoubtedly is Imminence.

“It has been two years of incredibly hard work and song writing leading up to Turn The Light On. This album was not about moving forward as much as moving inwards. It was about finding ourselves and showing what Imminence is all about. I believe it encapsulates and defines our sound over these years as a group. The creative process was anything but easy and gave me a lot of time for soul-searching, both musically and personally. Having waded through the darkest time in my mind for the better part of creating these songs and writing these lyrics, the music was the thing I held on to and that kept my head just above the surface long enough to catch my breath. The same way that it became a light in the dark for me, I hope that others may find the same in listening to our songs. That is what this album is, a symbol of hope. I truly think it all comes together as our best release as a band to date.”

”Even though we worked harder and more intensely than ever before, the writing process has been liberating and unhindered. I could wake up in the morning and feel inspired to write a song with a completely different approach than the one we wrote the day before, and I think both me and Eddie did our very best to keep our minds open throughout the writing of the album. There were really no rules applied. We actually never had a concrete idea of how we wanted the record to turn out, which was a bit worrying at the time. We had made a huge step in to another musical direction with This Is Goodbye and the road ahead was unclear. With time, we saw Turn The Light On taking shape right before our eyes and knew that all we had to do was to trust our own instincts and creativity.”

»Turn The Light On« was written and produced by guitarist Harald Barrett and vocalist Eddie Berg together, with drummer Peter Hanström writing additional drum parts and arrangements. The songs were mainly recorded at Alias Studio in France by Bert and Eric Poncet who further helped to engineer and produce the album. Drums were produced by Christian Svedin and recorded in Studio Mega, Sweden, while additional recordings of choirs and strings were recorded by the band in both Germany and at their home studio in Sweden.
The mix and master was done by Henrik Udd (winner of Best Producer at Heavy Music Awards 2017). During the years he’s been working with tons of talented bands and musicians and has been mixing, mastering, produced and recorded some of the most critically acclaimed albums with acts such as ARCHITECTS, BRING ME THE HORIZON, AT THE GATES, DELAIN, POWERWOLF, I KILLED THE PROM QUEEN, HAMMERFALL and many more.

”When I heard Henrik’s first mix draft, I was instantly convinced. It was all there and I had the feeling that he understood what we wanted to achieve with the new songs. Henrik delivered a production that was absolutely massive, yet elegant and authentic, without losing the organic touch and identity of us as musicians.”

From the deep, dark blue background of IMMINENCE’s ferocious and chaotic debut album I to the simplistic and jagged, colorful bird of the modernistic and melodic sophomore album »This Is Goodbye«, once again the band have worked with the same innovative designer Jakob Koc to create the artwork for »Turn The Light On«.

“Jakob is a long term friend of the band and it felt natural that we should ask him before anyone else. At this point he’s practically a part of Imminence, being so influential in the look and outcome of our visual universe since the start. There’s something about his simplistic approach that speaks to and corresponds with me deeply. He has continually developed alongside with the band and I think he really outdid himself this time. The artwork is a perfect representation of the lyrical theme, with the beautiful and bright façade concealing something much darker beneath, paired with the distinctive icon that symbolizes hope and light in the dark. Symbols have virtually become something of a trademark sign of the band and this one is definitely my favorite so far.” 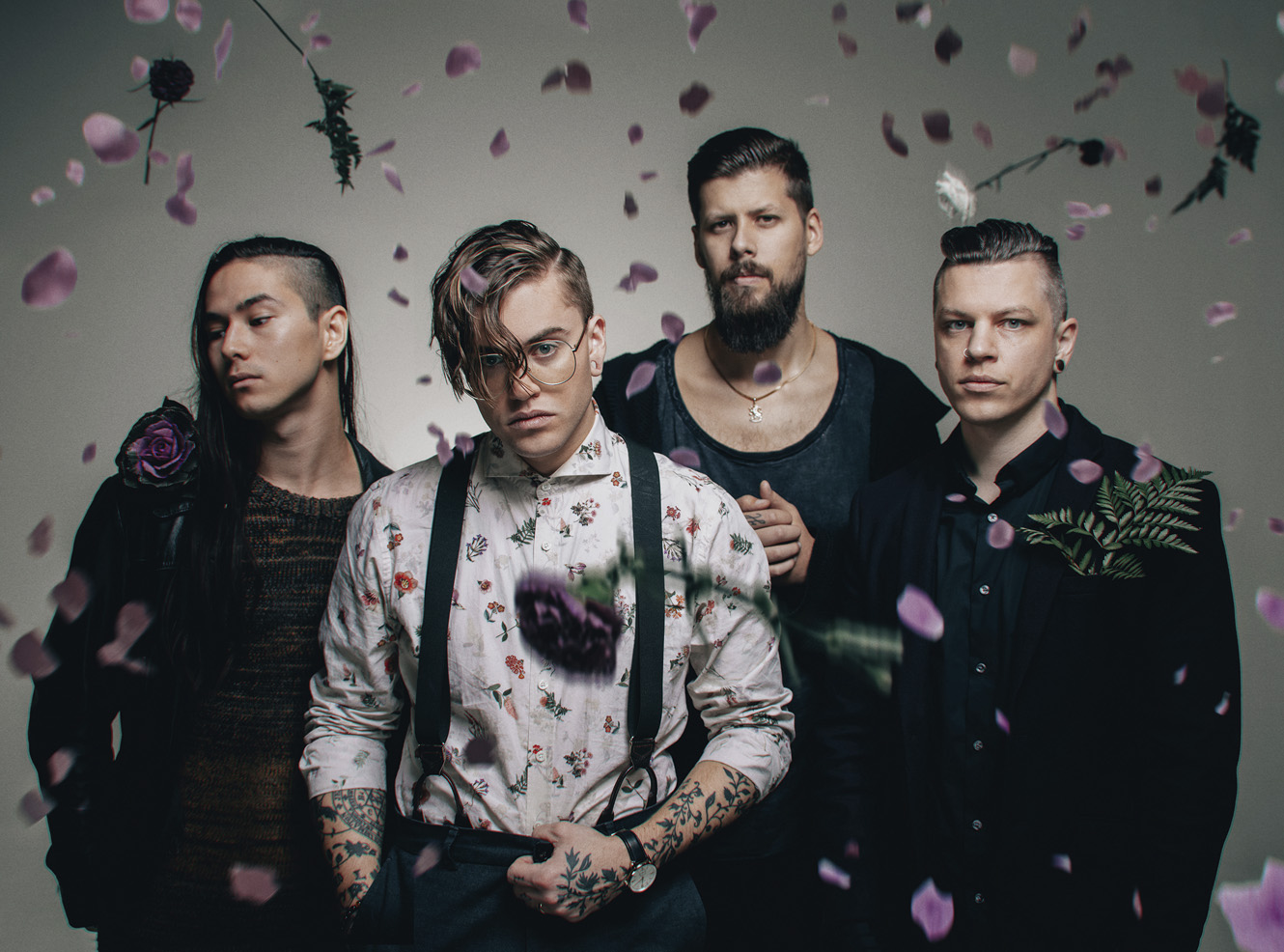 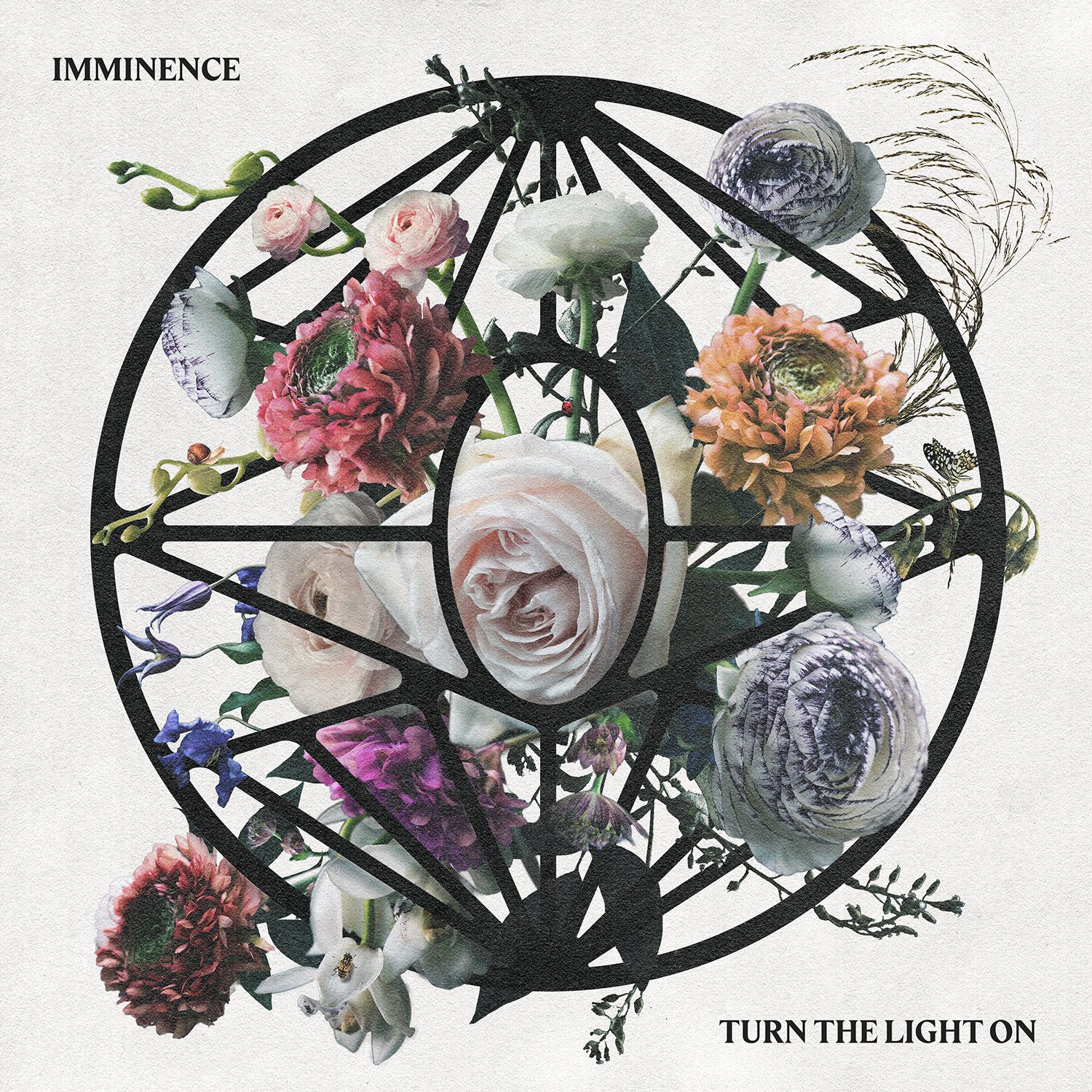 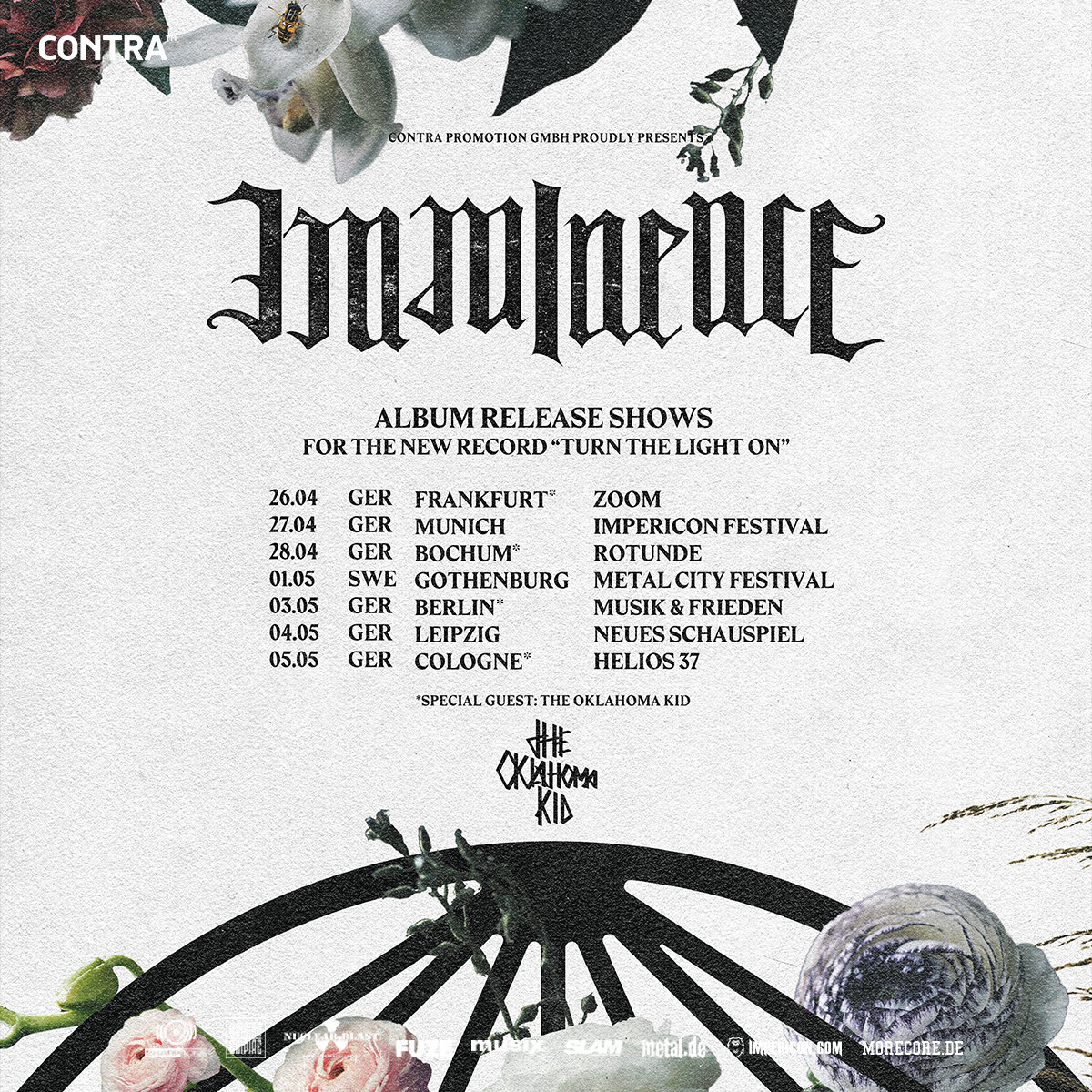