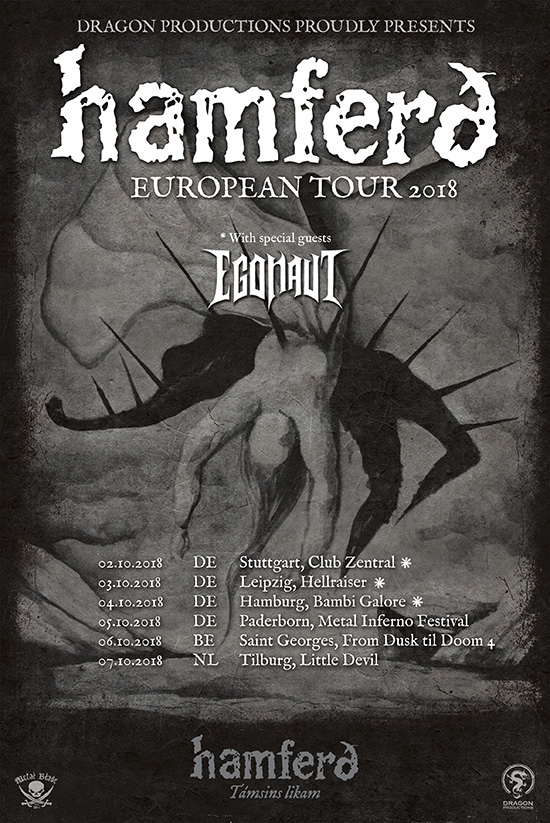 Faroese doom metal band Hamferð have just announced six dates in Germany, Belgium and The Netherlands in October as part of the support for their latest album ‘Támsins likam‘, which was released to great acclaim by Metal Blade Records in January 2018. Joining them for the first three dates of the tour will be Swedish occult stoner compatriots Egonaut.

“We are very much looking forward to coming back to Germany and The Netherlands after our successful tour earlier this year. It’s also going to be special to get to play our first show in Belgium for seven years. Joining us on the first half of the tour will be the excellent Egonaut, who will help us create a very special doom ceremony. This is not to be missed.”

In addition to the four club shows Hamferð are scheduled to perform at the Paderborn Metal Inferno and From Dusk Till Doom festivals during the six-day trek.

‘Támsins likam‘ has been released in January via Metal Blade Records! Please surf over to metalblade.com/hamferd to check out music and videos from the album.

You can hardly say that Swedish retro/stoner/doom hardrockers Egonaut offer anything new to the world of metal, but their new release is nevertheless a decent effort – however not perfect. Starting out very elegantly with the flaws [Read »]