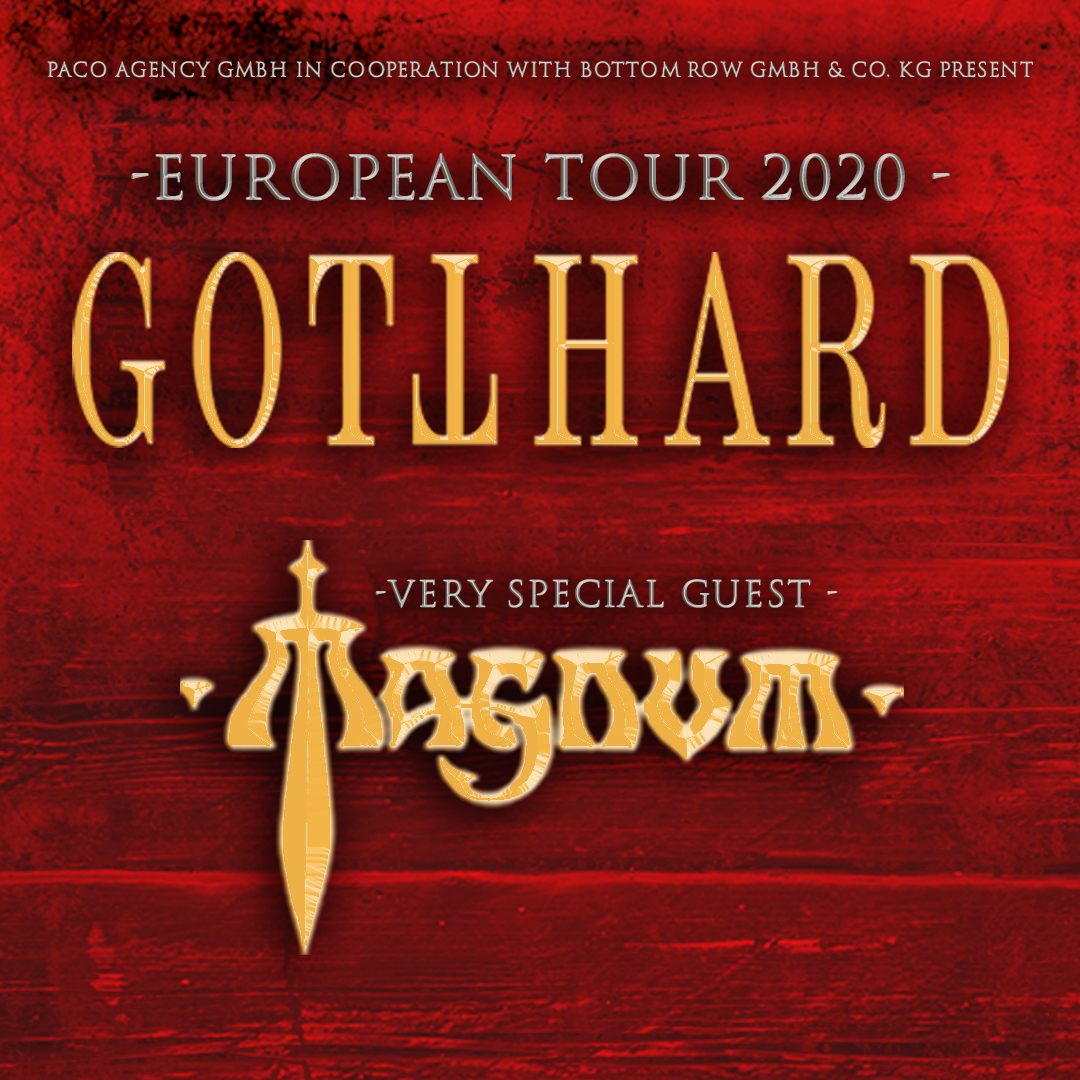 Did this awesome tour package fall directly from heaven? After all, the legendary Swiss rockers GOTTHARD already have a connection with their ballad ‘Heaven’ and the Britons MAGNUM also know quite a lot about divine sounds thanks to their 1988 hit album „Wings Of Heaven“. Of course both headliner GOTTHARD and very special guest MAGNUM have also produced plenty more hard rock epics throughout their careers.

While at the beginning of their career GOTTHARD were simply labeled heavy metal, but they broke free from these constraints a long time ago. With their big, memorable melodies combined with their signature heaviness, GOTTHARD established themselves as a true force to be reckoned with that doesn’t need to resort to cheap slogans in order to gain attention. Their music speaks for itself. Classics like ‘Mountain Mama’, ‘Starlight’, ‘Anytime Anywhere’, ‘One Life One Soul’ and millions of records sold, with gold- platinum and diamond- status tell a clear message. 16 of their full-length albums have reached #1 in the charts and they’re once again aiming for that spot with their forthcoming studio album in 2020. After a lengthy period of acoustic touring, the legends from Lugano in the canton of Ticino will once again turn up their power next year for the band’s 30th anniversary. Armed with a strong new album that will be released via the renowned label Nuclear Blast, they will reclaim the peak of rock-Olympus Swiss style. GOTTHARD are not only the most successful Swiss band, the gentlemen are also internationally renowned for their live performance. After more than 2000 shows across three continents with other rock giants such as DEEP PURPLE, BRYAN ADAMS, BON JOVI and AC/DC, the Swiss know how to rock their audiences – and also the charts, thanks to more than three million records sold all over the world. Now the best and mightiest rock-force of all time will return with a big tour. Headlining of course! With new, proven, straight up rock songs without frills and powerful, melodious ballads…

Forming in 1972 and successfully rocking on a global level, MAGNUM – a band based around the two kindred spirits of guitarists Bob Catley and Tony Clarkin – are also gathering new material
that sits somewhere between melodic, progressive, and hard rock. Besides their evergreen records from essential albums like “On A Storyteller’s Night”, “Vigilante”, “Wings of Heaven”, “Chase the Dragon”, “Sacred Blood”, “Divine’ Lies”, and “Lost On The Road To Eternity”, they will also be playing some new songs. MAGNUM also introduce their new bass-player Dennis Ward, who recently became part of the band. Ward previously worked as a producer and musician in bands like PINK CREAM 69 and UNISONIC.

If this great combination of GOTTHARD and MAGNUM didn’t exist already, it should’ve really been invented.

Tickets are available at: https://gotthard-karten.reservix.de/events

Get »Defrosted 2« via Nuclear Blast as 2CD Digibook and 4LP Box: http://nblast.de/GotthardDefrosted2

If I had to describe Magnum in one word it would probably be: “stable”. You always get well-crafted songs, a first-class vocal performance and splendid guitar work. The cornerstones are off course Bob Catley’s great [Read »]