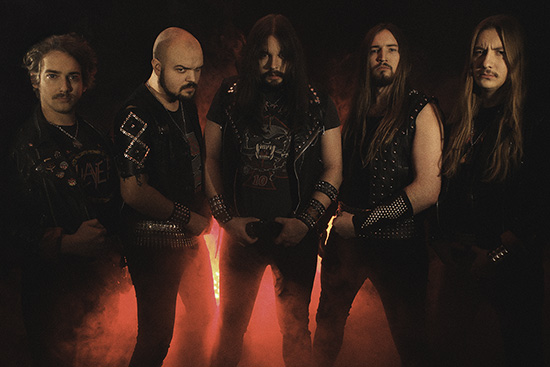 Metal Blade Records is proud to announce the sealing of a pact with German Speed Metallers VULTURE.

The full metal quintet has signed a multiple album deal with the Blade and is right now in the songwriting process for their tentative new album to be released by the end of 2018.

“We feel proud and honored to officially announce our contract conclusion with METAL BLADE RECORDS! Signing up with the legendary label that released many of those albums that sparked our passion for extreme metal in our youths feels like completing the circle. Now, more motivated and bloodthirsty than ever, we are already eagerly working on new tracks for our second full-length. Attention posers! Prepare to die!”

The High Speed Metal militia that is VULTURE was formed in late summer 2015. It was only half a year later when their first demo entitled ‘Victim To The Blade‘ saw the light of the day.

Their first output contains four fast, eerie and face melting tracks that created a huge furor around the scene. The feedback was so tremendous that it not only resulted in multiple rereleases as an EP on vinyl and CD, but also for participations in renowned concerts and festivals around Europe such as Metal Assault, Hell Over Hammaburg or the infamous Live Evil festival in London.

VULTURE released their debut LP ‘The Guillotine‘ in the summer of 2017 and straight on the boys continued their killing streak with eight massive songs that contained even more aggression and fury than their predecessors. Having added more melody and variation to their songwriting, VULTURE clearly emphasizes that they are not in line for being yet another homage to the 80s metal scene.

Being joined by a fifth member and now permanent drummer just a few months ago, VULTURE has lifted off higher than ever in order to deliver another full-length album soon. The studio has already been booked for this summer and we can definitely assure you: VULTURE kills!