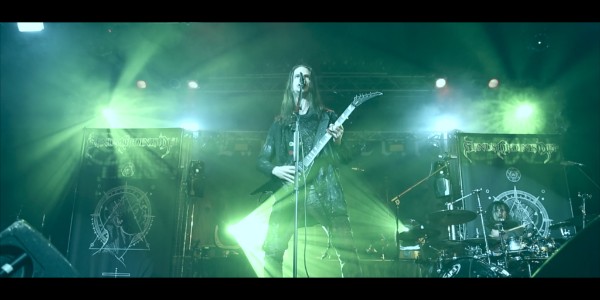 Symphonic death metal quartet Genus Ordinis Dei are back in the spotlight with the release of a new music video for the song ‘You Die in Roma’. Watch it right now, at this location. The video was filmed at the Live Club in Milano, Italy while on tour in 2017, and it was directed by Giovanni Bottalico and Diego Alberghini of MelaZstudio. This is the third video from their latest full-length album Great Olden Dynasty which was released worldwide via Eclipse Records on November 24, 2017.

“We wanted to describe his feelings, thoughts, and how gladiators really felt in that period. Many were deprived from their families, with some treated as property, and used to provide entertainment for the crowd. We also decided to keep the name “Roma” in Italian, first to remark our Italian origin and second, to honor the greatness of the roman empire.”

“We shot this video at the very last minute, after coming back from almost forty days on the road to play the remaining Italian gigs of the Delirium World Tour with Lacuna Coil. We were extremely pumped to play our hometown show in such a beautiful venue in front of our families and closest friends.”

The album has already racked up over 70,000 organic plays on Spotify, receiving heaps of stellar reviews from press and media alike:

Buy the full album on CD, iTunes, Amazon, or Google Play, and stream it via Spotify, Apple Music, Pandora, Deezer, and more at http://eclp.se/rgrtl