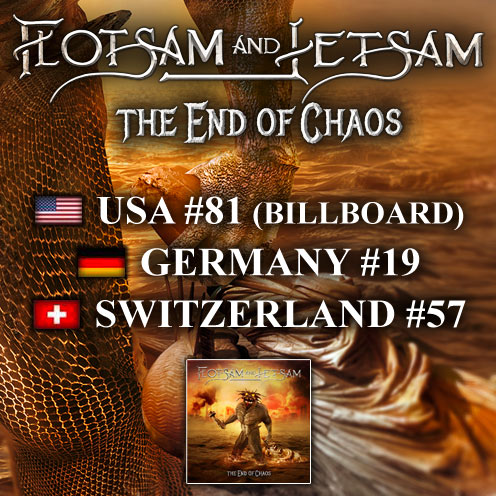 Sensational and highest chart entry into Flotsam and Jetsam music career! We are mighty proud of 19th place German media control Chart. Also they break the Top 100 in US Billboradcharts and end up #81. In Switzerland the end with 57th place in the official top 100!

Thrash metal veterans, Flotsam And Jetsam, have entered Germany’s GfK Entertainment Charts at #19, with their new album, The End Of Chaos, out now via AFM Records. This is the fourteenth album in their more than 30-year history.

“This album kills! It’s all five guys with the gas pedal pushed to the floor for the entire album!” states Ken Mary.”It was cool to have a new element of influence on this album with having Ken’s drum parts to partner with and play in and around his playing that also do with the guitars and vocals. Glad to have had Jacob Hansen bringing this album to the overall sound and energy it has, Jacob really highlights AK’s vocal melodies, as well as Steve and Michael’s songwriting, while the power of the rhythm section drives the songs.” – Michael Spencer

I am not going to bore you about this great band’s history because you probably know all about it. After the first fabulous albums a few followed that didn’t reach that high level. With ‘The [Read »]

FLOTSAM AND JETSAM – Iron Maiden (2016) // official lyric video // AFM Records The song is taken from the album “Flotsam and Jetsam”, to be released on May 20th – pre order now! http://promo.afm-records.de/flotsam_j… [Read »]