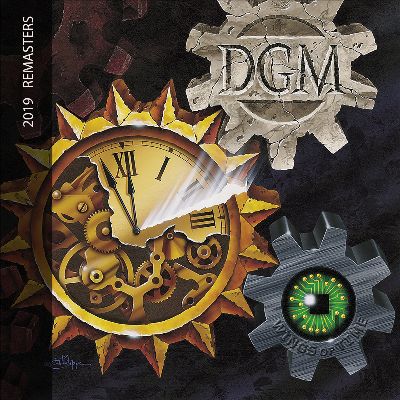 Finally available (remastered) in digital format in download and on all streaming platforms ‘Wings of Time’ which is the second DGM album, published in 1999. The sound becomes much more elaborate than the previous ‘Change Direction’ (also from slightly reprinted) but remains very powerful and fast. Fabio Costantino joins the drums, replacing Gianfranco Tassella, who we find here as a producer. It is a more mature album than the previous “Change Direction” and begins to outline a more mature sound. Wingd of Time is the last album that sees Luciano Regoli on vocals with DGM

The DGMs formed in 1994 as an instrumental band. The original line-up sees Diego Reali on guitar, Maurizio Pariotti on keyboards and Gianfranco Tassella on drums. After a year Marco Marchioni is added to the bass. The band played a lot at that time and participated in the ‘Rock Innovation’ festival where it came in second place. Later they start working on their first self-produced min CD “Random Acces Zone” in which the new entry Luciano Regoli also makes his debut on vocals. Luciano is certainly not a newcomer: he played in some seminal groups of the Italian prog of the 70s such as the ‘Recommended Return Receipt’ and ‘Portrait of Dorian Gray’ (together with Claudio Simonetti), and Samadhy. Finally, with a vocalist worthy of the name, the group is able to have its own personal style, mixing 70s sounds with the power vein that distinguishes them. The work gets a great response in the Italian power speed metal scene and not only and above all allows the group to get a contract with the Italian label Elevate Records. With a label behind him, the production of the first full length album begins.

In the summer of ’97 the band completed ‘Change Direction’ which will be released in November of the same year. The album receives excellent feedback almost everywhere, Italy, Germany, Finland, Denmark etc … and the band begins a tour that leads them to touch many Italian cities and keep them busy for the first part of ’98. Upon returning from the tour, the group begins to think about the second album but in this period the drummer Gianfranco Tassella leaves the group, in a friendly way, so that he continues to follow the group as a sound engineer. The new drummer is Fabio Costantino, already with the death metal band Carnal Raptor. Throughout January and February 99 the group is in the studio recording what will become their second album “Wings Of Time” which will be Top Metal Album on the best Italian and international magazines. The album comes only in Japan 4000 copies in the first 10 days, a unique result for a metal and even Italian band! At the end of 2000 after tours and interviews L’uciano Regoli left the band and in his place he joined the new singer Titta Tani.

Frontiers Music Srl is excited to announce the signing of Italian Prog Metal masters DGM for a multi-album deal!

BREAKING NEWS: Frontiers Music Srl is excited to announce the signing of Italian Prog Metal masters DGM for a multi-album deal! DGM started in 1994 as an instrumental band and evolved over the years into [Read »]