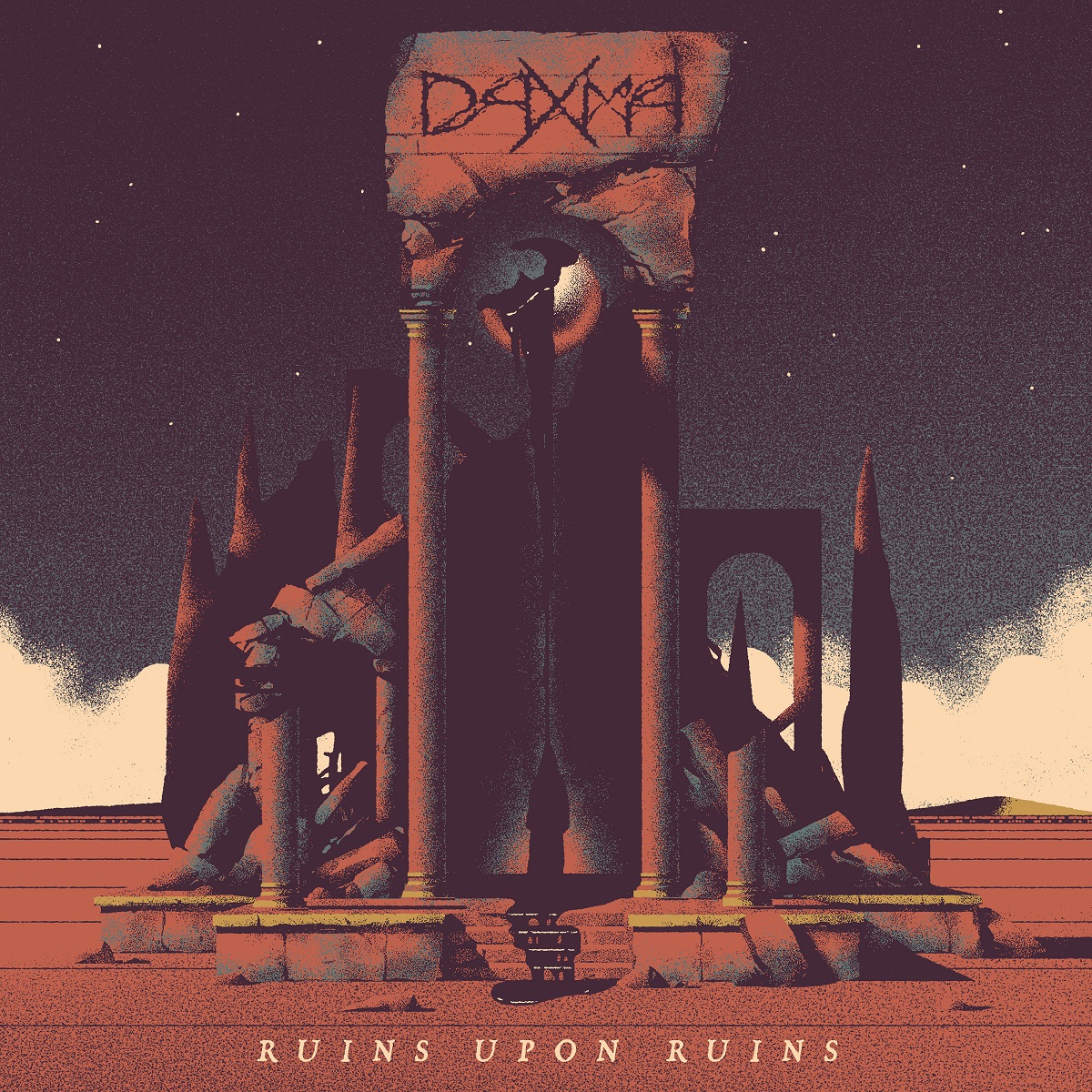 DAXMA (pronounced [dahk-muh]) is an Oakland, CA based post-rock/doom metal band that began in Santa Cruz, CA in 2014. A collaborative project made up of members – Jessica (vocals, guitar, violin), Kelly (vocals, bass), Isaac (vocals, guitar), Forrest (guitar), and Thomas (drums) –  sharing a varied musical background, including black metal, psych, and classical. DAXMA unites nuance and fragility within a framework of devastating crush that imbues significance to each motif and passage.

Arriving on July 26th from Blues Funeral Recordings, ‘RUINS UPON RUINS‘ is the third release from DAXMA. The EP brings nearly twenty-five minutes of neural captivation engulfing the emotional borders of the past and present, conjoining the personal and inspirational sides within DAXMA to highlight the art of critical thought.

The band explains a bit about the new release:

“Ruins Upon Ruins is thematically a response to the Hegelian outlook of our last album, ‘The Head Which Becomes the Skull’, which adopted a dialectical method to its movement. The title is taken from a line in an essay called ‘On the Concept of History’ by Walter Benjamin, who, disputing Hegel’s notion of history as the story of progress, writes about an angel of history looking backwards towards the past.”

“Minima Moralia” is a meditation of ideological vision, and even as it comports with genre in its progressive and weighted aspects, it looks outside musical confines for direction and inspiration. It says much during its run without the use of lyrics.

It comes accompanied by a cover of the 1975 Fleetwood Mac single “Landslide,” made iconic through the heartfelt vocal performance of Stevie Nicks. A song that remains recognizable for its melody and folkish lyric in DAXMA’s hands, but is given a new breadth of instrumental arrangement and depth as the band makes it their own.

It’s on odd pairing on paper, admittedly, but DAXMA leave little doubt that it’s part of their intention. Just as “Minima Moralia” seems to be a space of intellectual engagement, “Landslide” becomes an emotional contemplation, with a deeply personal origin on the part of the band itself.

‘Ruins Upon Ruins’ will be released for digital download and streaming, as well as physical format in a limited edition 12″ vinyl pressing on July 26th through Blues Funeral Recordings. 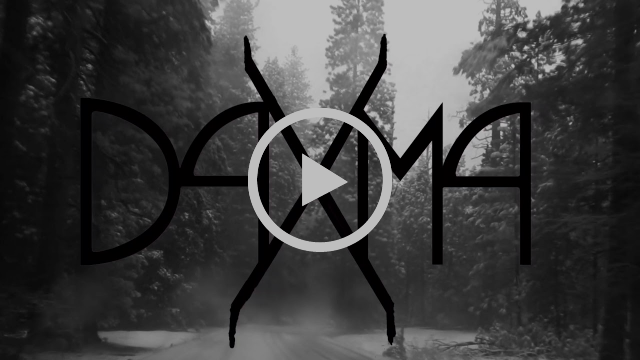 ‘Ruins Upon Ruins’ will be available July 26th from Blues Funeral Recordings:

“…the strength and confidence of the melodies and variety between songs make multiple listens rewarding. Daxma are definitely a band to keep an eye on…” – Echoes And Dust

“…it is an emotional journey that welcomes the listener to enjoy the long ride, all the while questioning the inner motives that lie behind one’s life… this is a titanic album that deserves to be heard by anyone with even a cursory interest in bands like Pallbearer or Elder.” – Pure Grain Audio

“…both crushing and subtle in equal measure, working the band’s creeping sonic despair into a massive, heavy riff and then back again. It’s the sort of sound that will haunt you when you’re alone on a quiet night – when you can feel the notes still reverberating in your mind.” – Super Dank Metal Jams 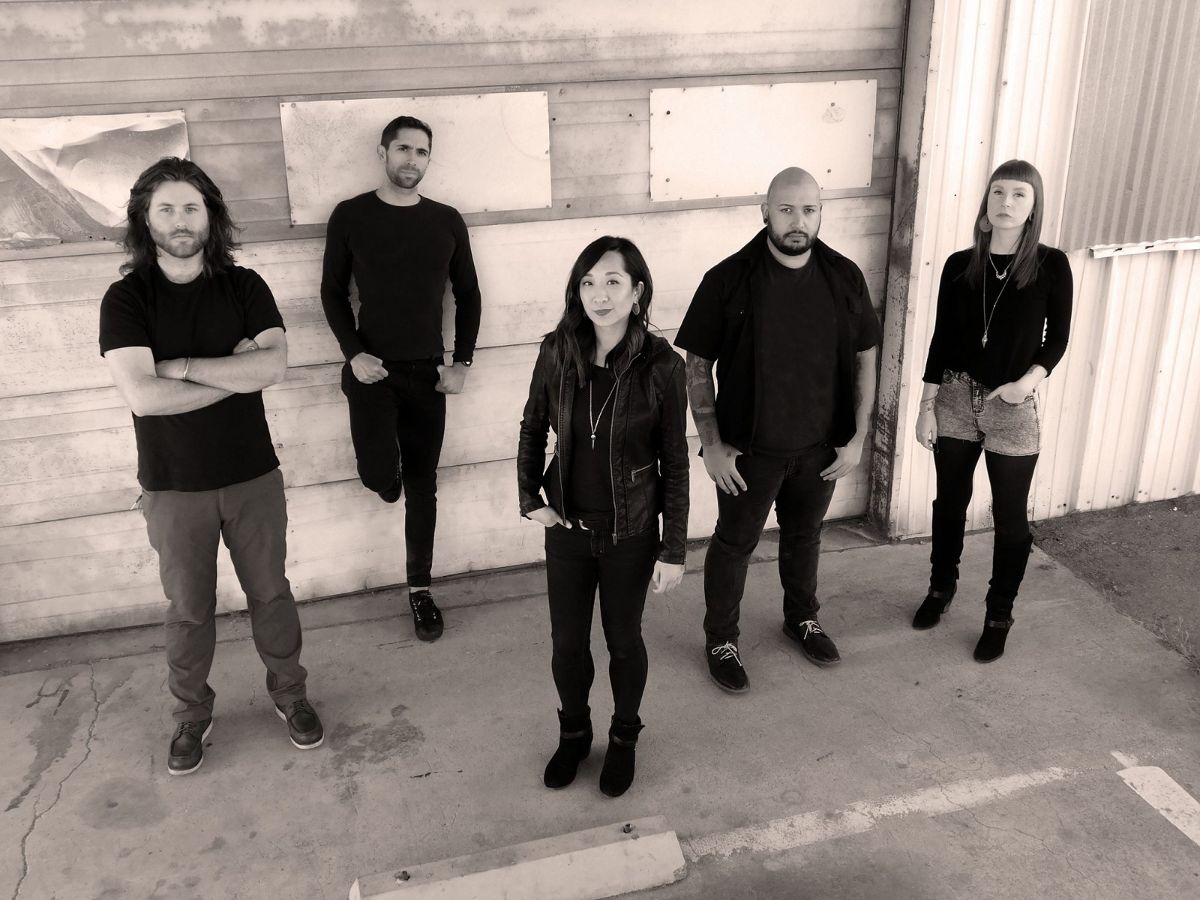 Jessica T. – Vocals, Guitar, Violin
Kelly D. – Vocals, Bass
Isaac R. – Vocals, Guitar
Forrest H. – Guitar
Thomas I. – Drums
A name originating in the Zoroastrian religion, DAXMA designates the ritual structure used as a site to dispose of the dead (also known as a “Tower of Silence”). From atop these circular stone platforms, the remains of deceased persons would be devoured by carrion birds, who would then scatter the bones to the winds.

In 2016, DAXMA released their first EP, ‘The Nowhere of Shangri-la’, a work centered around the themes of frustration, longing, and utopianism. In 2017, they released their debut LP, ‘The Head Which Becomes the Skull’. Inspired by various philosophical works including Hegel’s “The  Phenomenology of Spirit”, Kierkegaard’s “Fear & Trembling”, and the Heart Sutra, ‘The Head Which Becomes the Skull‘ served as a meditation on the journey of the soul from birth through death.

In staying true to its ethic to subvert hierarchical systems of oppression, DAXMA has no leader nor single voice to its message. DAXMA’s ambition is to create beautiful and challenging music that is
meant for more than passive consumption, but rather to inspire its listeners to action against the injustices of capitalism, nationalism, racism, sexism, and totalitarianism.

Recently hand-selected as part of the inaugural year of the exclusive PostWax subscription series from Blues Funeral Recordings, DAXMA is currently working on their next full-length release.

‘Ruins Upon Ruins’ will be available July 26th from Blues Funeral Recordings: