SLASH, LAMB OF GOD, AMON AMARTH AND MANY MORE JOIN THE LINE-UP OF COPENHELL 2019!

Read much more about the festival in our official COPENHELL app.

COPENHELL adds 16 new bands from a multitude of different music genres in the hard and heavy end of the spectrum to next year’s festival poster, which delivers huge musical variation all the way down from the dark underground and up to the biggest mega acts. 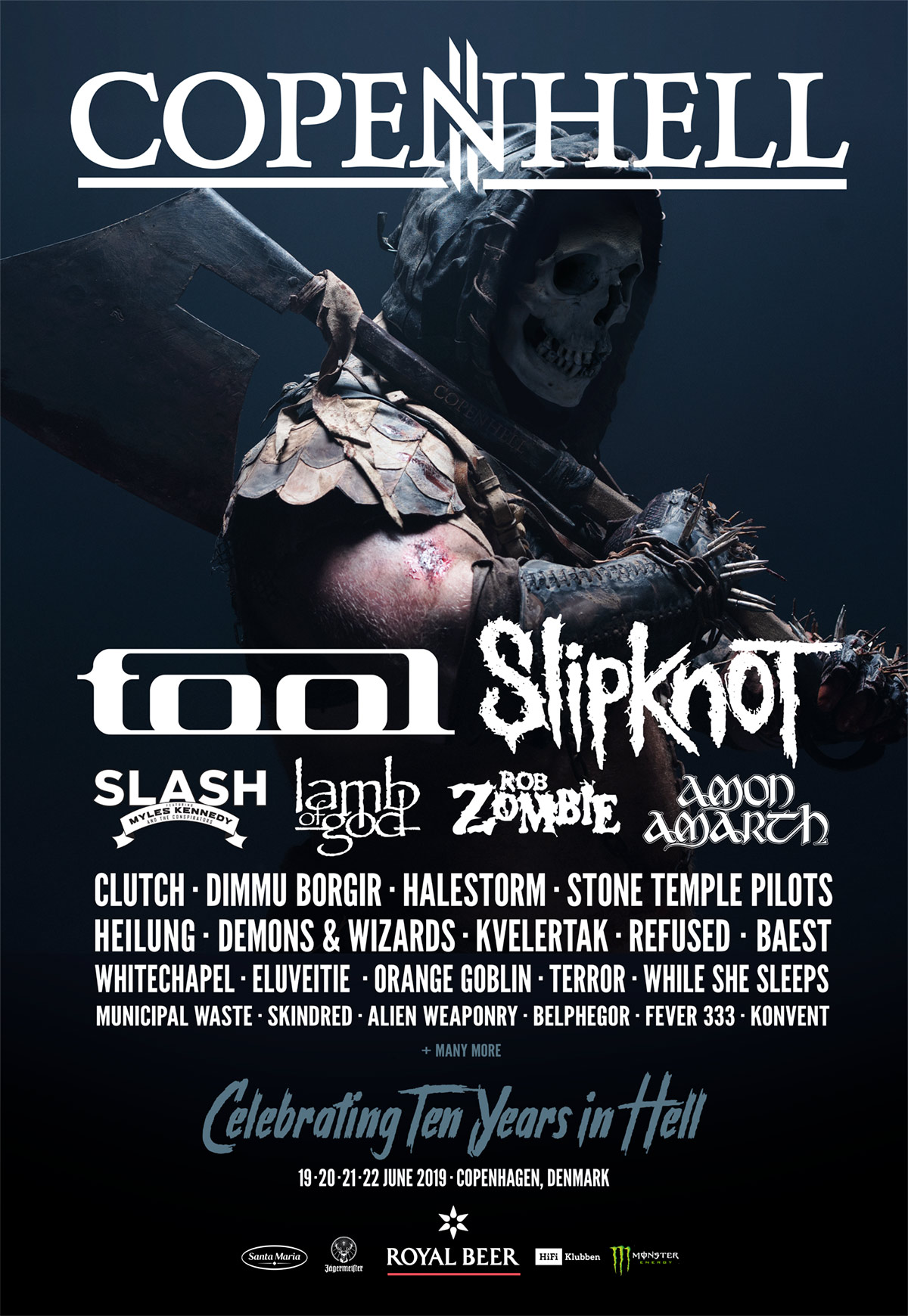 Get ready for a wild tour around the hard and heavy genres at COPENHELL 2016 with no less than 16 new bands on the festival poster: The iconic Guns N’ Roses guitar virtuoso Slash embarked on his exciting solo career ten years ago while still playing in the great rock band, and he is now touring regularly with Alter Bridge front man Myles Kennedy in the group SLASH FEATURING MYLES KENNEDY AND THE CONSPIRATORS, one of the greatest rock acts at COPENHELL 2019!

The unstoppable American rock band CLUTCH returns to COPENHELL with their hard, engaging punky/groovy blues rock, and STONE TEMPLE PILOTS will visit the festival for the first time ever with a concert combining a solid dose of grunge nostalgia with modern rock!

Everyone that survived LAMB OF GOD’s mad concert at COPENHELL 2012 knows what we can expect when Randy Blythe & co. return to Copenhagen in 2019 with a monstrous blast of a metal concert: A chain explosion of musical rage from the stage – and perhaps – a whole new record for the greatest Wall of Death ever at the festival.

The wild Swedish Vikings from AMON AMARTH are one of the greatest institutions of Nordic death metal, and they will send their longboats out for a new attack on Copenhagen this summer.

Austrian BELPHEGOR channel evil incarnate with their relentless blackened death metal, which will hit COPENHELL’s audience like a musical weapon of mass destruction.

KVELERTAK serve up their Norwegian bully metal with a ferocity and intensity like few other bands! Their mix of angry black metal and groovy rock’n’roll is an incredibly entertaining and winning music combo, rumbling with energy and irresistible singalong factor.

The seminal punk band REFUSED has inspired countless other bands over the years, and COPENHELL’s audience will finally get to experience these Swedish veterans live at the festival.

The hardcore titans from TERROR will spread their aggressive and raging underground sound, while crossover thrash icons MUNICIPAL WASTE will create a wild party in the pit!

From The British Isles we have ORANGE GOBLIN who play thrashy and groovy stoner metal of the kind that will give you a sore neck for several days afterwards.

The metalcore band WHILE SHE SLEEPS will show up and beat the audience senseless with their heavy, explosive sound and crackling, infectious live energy, while Welsh SKINDRED step into the line-up with their wild and crazy ‘Ragga Metal’, pushing the metal and rock genres’ boundaries to their very limits!

We are also very happy to bid the super group THE FEVER 333 welcome to COPENHELL 2019: With the charismatic Letlive frontman Jason Butler behind the mike, Night Verses drummer Aric Improta on the cans and former The Chariot guitarist Stephen Harrison on the axe, the band delivers their riffy and groovy metal with a punchiness like Rage Against the Machine and their own special blend of hip-hop and post-hardcore.

HEILUNG is an experimental folk band based in Denmark, but with members from several different countries, which has shot up from the underground and become incredibly popular in no time.

Their live performances are reminiscent of heathen, shamanistic rituals in a holistic experience that draws the audience into a fascinating ancient spiritual universe.

The other exciting Danish band in this announcement is KONVENT, a young group from Copenhagen that plays moody doom metal and made their way to COPENHELL with a great concert at When COPENHELL Freezes Over 2018 earlier this year.

Read much more about the festival and all of the bands at COPENHELL.dk or in our official COPENHELL app.