The 31st edition of the Wacken Open Air, which will take place from the 30th of July until the 1st of August 2020, is sold out after less than a day. The advance sale of the 75,000 tickets had traditionally started after the festival at midnight on Monday, August 5th. Fans from 83 countries have purchased tickets.

“We are stoked that tickets for the Wacken Open Air 2020 have again sold out in a sensationally short period of time”, comments festival founder Thomas Jensen. “The great success of this year’s anniversary edition and our announcement of the first bands for next year have obviously convinced our fans that they can rely on us for which we are extremely thankful. Well, it also might be that the reason for this humbling vote of confidence is that metal god Rob Halford will celebrate 50 years of JUDAS PRIEST in Wacken.”

“It is our declared goal to create an even greater festival every new year,” adds festival founder Holger Hübner. “We can only thank our fans wholeheartedly for relying on our experience to put together another exciting band billing. Of course, metal music always comes first, but also the supporting program will again offer innovations. We will make every effort to live up to the advance praise of this quick sell-out.”

The Promoters point out that no third-party tickets should be purchased – with the exception of the official travel partners listed under the following link: www.wacken.com/en/all-information/official-travel-partners

The Wacken Open Air has already announced the following bands for the coming 31st edition of the festival in 2020: JUDAS PRIEST, AMON AMARTH, MERCYFUL FATE, AT THE GATES, VENOM, HYPOCRISY, SODOM, DEATH ANGEL, SICK OF IT ALL, BEAST IN BLACK, NERVOSA, CEMICAN 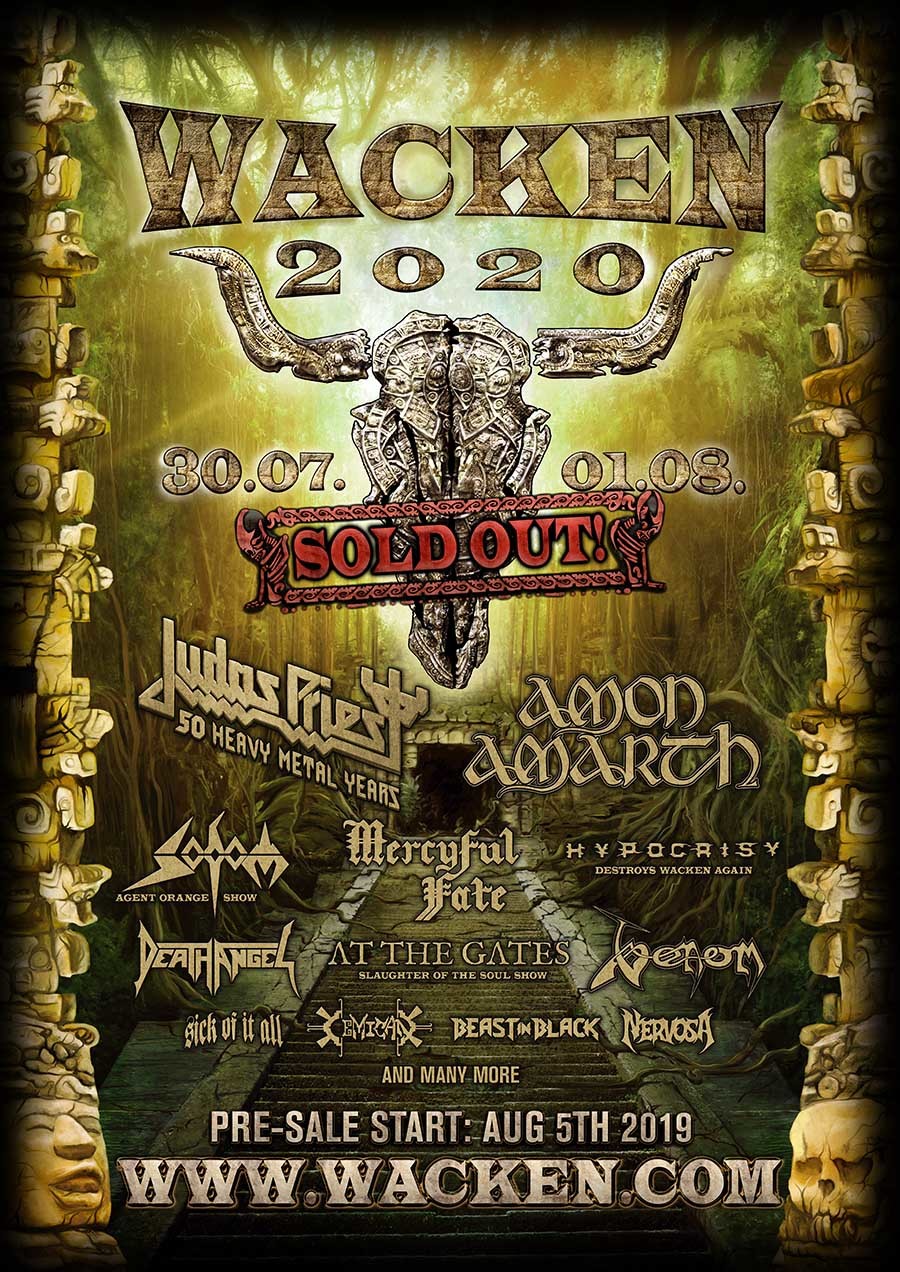 JUDAS PRIEST will celebrate “50 Heavy Metal Years” at the Holy Ground. It will be an honour to welcome the legendary British band for the fourth time. Swedish Metal Vikings AMON AMARTH first played at the Wacken Open Air in 1999 and will perform here for the ninth time next summer. MERCYFUL FATE are considered a classics in the history of metal and in Wacken frontman King Diamond will resturn to the stage after a long absence. AT THE GATES have laid the foundation for melodic death metal of the Gothenburg style and have thus shaped the whole genre. The Swedes’ cult album “Slaughter Of The Soul” from 1995 will be celebrated with a special show in Wacken. Their compatriots HYPOCRISY recorded a timeless live document in 1998 at the fesival and will finally be back in Wacken after an artistic break.VENOM have given the extreme style of black metal its dark name – their eponymous album. The uncompromising trio led by vocalist Cronos will strive to be “Too Loud for the Crowd” again. SODOM are a household name for thrashers around the globe. The band from Germany’s Ruhr area has reunited with guitarist Frank Blackfire and will celebrate their milestone classic from 1989 with a special “Agent Orange” set in Wacken. DEATH ANGEL are also being named as thrash icons, but belong to the so-called Bay Area scene, which has produced Metallica among other great bands. The unconventional Americans will enrich the Wacken Open Air next year as well as SICK OF IT ALL, who have decisively influenced the New York hardcore style and straight to the point fierceness. Traditional metalheads will definitely have fun watching Finland’s BEAST IN BLACK. The young Brazilians NERVOSA represent the next thrash generation. CEMICAN appear in the new trailer and were also on stage during the live announcement of the new bands. With their mixture of traditional instruments and hard metal, this Mexican band represents the culture of the Maya and Aztecs, who will be thematically present at the Wacken Open Air 2020 … in a culinary sense, in pictures, shows, and sounds. We can already reveal that much: You will be amazed. 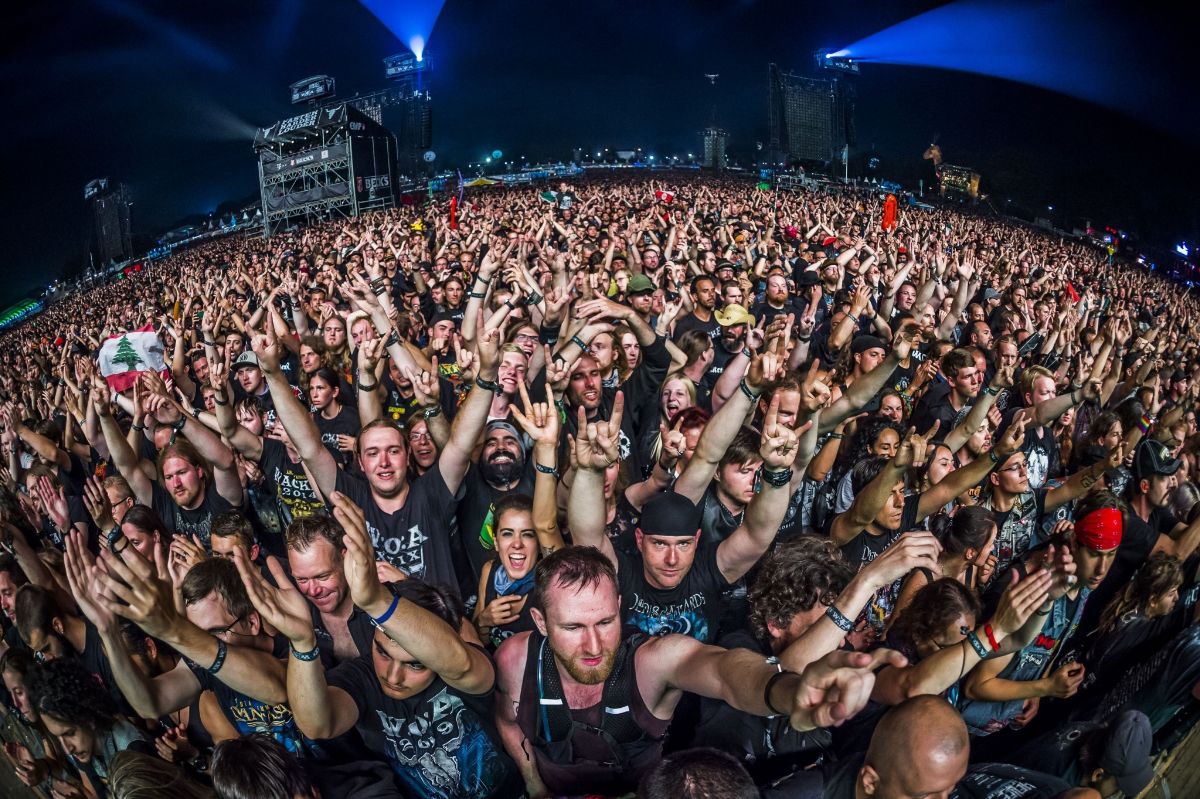 Wacken Open Air is the largest heavy metal festival worldwide. Founded in 1990, its original attendance of 800 visitors has grown to more than 75,000 fans from all around the globe each year. For a handful of days, the village of Wacken with its roughly 2,000 inhabitants is turning into the third largest city of the state of Schleswig-Holstein. The ICS Festival Service GmbH as long-standing festival organiser is combining music related business areas such as band management, the “Wacken Foundation”, tour booking, music publishing, metal travel, merchandising, and ticketing. In cooperation with diverse partner companies, this network is the source of creative solutions and ideas that revolutionise each visitor’s festival experience, creates technical innovation and produces extraordinary event concepts such as the Full Metal Cruise or the Wacken Winter Nights. This year’s Wacken Open Air will take place from the 30th of July until the 1st of August 2020. Further information can be found at www.wacken.com.