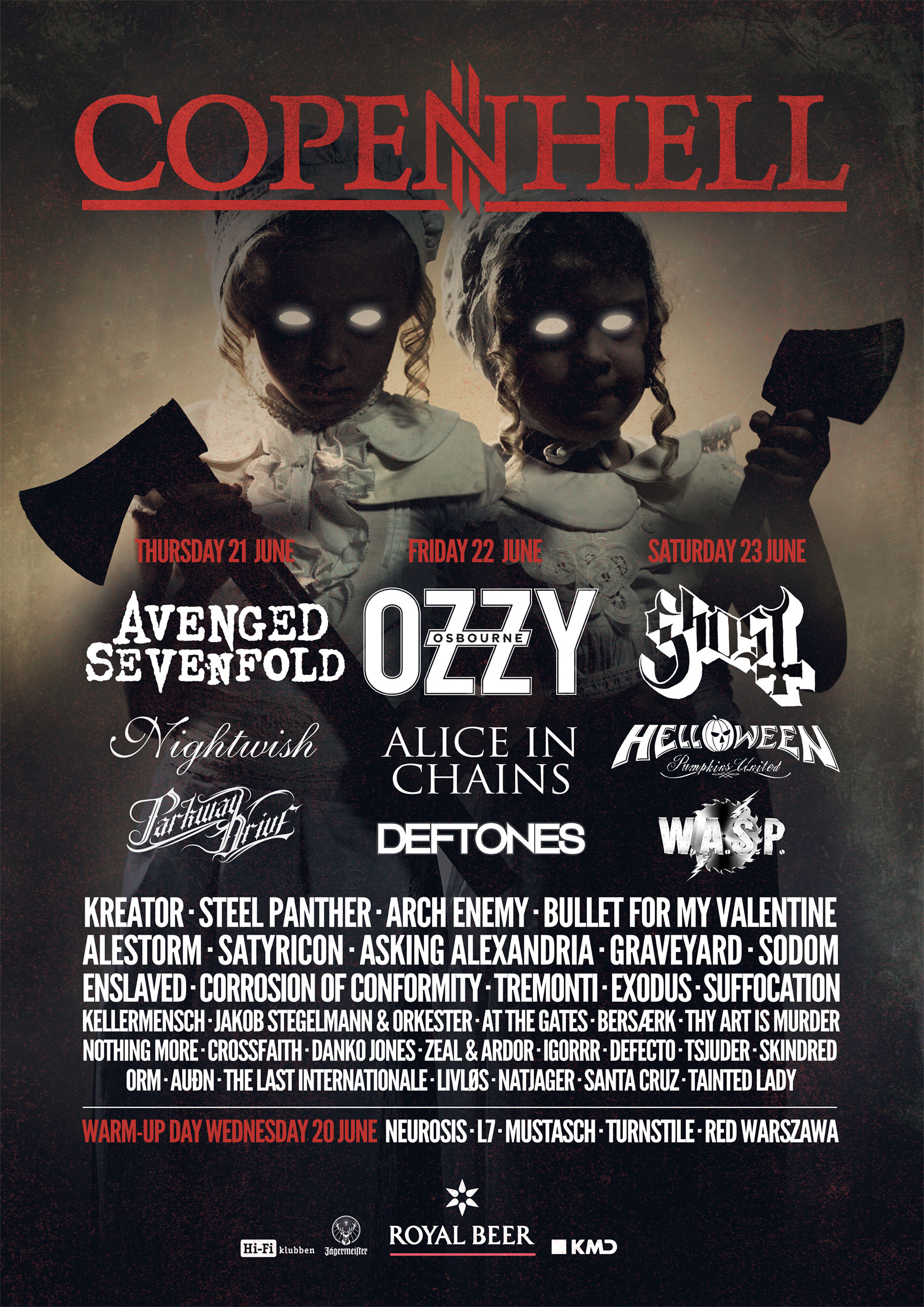 W.A.S.P., STEEL PANTHER, SATYRICON, GRAVEYARD and many more have been added to a strong and varied line-up for this summer’s hell.

June’s music party will be kicked into action for good when the COPENHELL 2018 audience gets to experience the great American shock rock band W.A.S.P. and their legendary, mad live show! Already in the early eighties, Blackie Lawless & co. became famous for setting the American music scene on fire with their musical berserk fury and constant provocations – and they continue with unrelenting strength today. This concert will no doubt cause the old B&W shipyard hall next to the festival site to resound for days after the festival ends!

The perfect partner for this highly requested headliner is the music comedians from the glam metal band STEEL PANTHER and their funny rock and metal parodies. The innuendo-laden, testosterone-dripping lyrics circle around everything from gangbangs to gloryholes, and top-class entertainment is absolutely guaranteed. It will be coarse, it will be offensive – and it will, not least, be absolutely hilarious!

In the black and gloomy end of the spectrum, one of the greatest black metal bands from the early nineties’ Norwegian metal scene will visit us – mighty SATYRICON! Their catchy and progressive ’black’n’roll’ is flavoured with both doom, death and heavy metal, and their music constantly challenges the listener with complex technical compositions and surprising elements.

Black metal is also one of Iceland’s finest exports these days, and we are happy to announce AUÐN – a band that breaks free from the mould with their unique, trance-inducing combinations of incredibly beautiful melodies and infernal walls of noise.

The Swedish hard rock band GRAVEYARD joins the line-up with their psychedelic 60s/70s blues rock that is inspired by everything from Led Zeppelin to Jimi Hendrix. All classic rock fans can definitely begin to look forward to a great live experience with this Göteborg band this summer!

With loads of primal energy, devil-may-care attitude and an impressive array of great songs in their back catalogue, we can expect great entertainment from the very first second together with the Canadian hard rockers from DANKO JONES. We look forward to a great reunion with one of the bands that played at the very first COPENHELL festival back in 2010!

The rebel rock band THE LAST INTERNATIONALE grew out of New York’s bubbling rock and punk melting pot, and they are famous for their explosive and involving live performances. With the addition of former Rage Against the Machine drummer Brad Wilk, the band’s special folk-punk has only become even wilder – not least due to lead singer Delila Paz’ colossal voice.

And finally, it is a great pleasure for us to welcome the last two Danish bands at COPENHELL 2018: Groovy, dirty and fast-paced death metal with uncontrollable aggression from LIVLØS and post-hardcore with hip-hop attitude and autotune from the innovative and provocative band NATJAGER!

Read much more and purchase tickets at Copenhell.dk

After three albums and numerous tours it’s time to unleash the first live recording… and not your normal crystal clear, huge audience, big production kind of live album. No this is a very stripped down [Read »]

The shock rocker Blackie Lawless has turned this back on his former self, and is now a declared new-born Christian. The result is a transition in his lyrical approach to things and leaving some songs [Read »]